After taking +Positive Spaces around the world, Interface is designing the change it wants to see in the world in its new headquarters in Sydney, Australia.

As the commercial sector continues to expand and claim its rightful space on the global design stage, “adaptability” and “flexibility” have become favourite buzzwords. With the concept of the agile office entering the mainstream, it is becoming increasingly difficult to distinguish projects that are taking earnest steps toward improving employee health and wellbeing from those that are simply riding the coattails of the movement.

At first glance, it is easy to mistake the movement toward adaptable, agile workplaces as purely aesthetic – open spaces; statement, unconventional furniture; an abundance of white, uncluttered workspaces. But the reality is that creating a workplace with an authentic, lasting impact on worker wellbeing is more complex, and entails encouraging attitudinal shifts and developing a strong vision and strategy for achieving the change we want to see in the world. 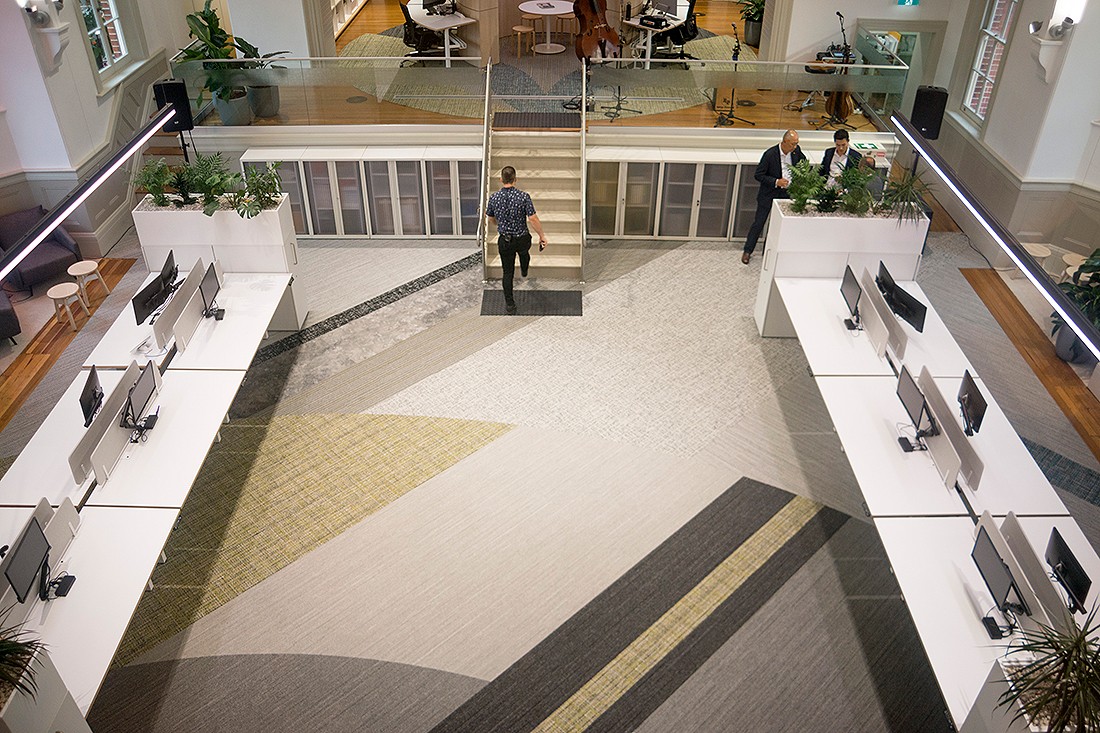 Arguably, no company understands this better than Interface, and the brand has taken +Positive spacesTM mission another step further with the redesign of its Sydney headquarters. In partnership with Group GSA, Interface has invested $1.5million AUD into reinvigorating its showroom, workspaces and communal areas, right next to the city’s busiest train station. The revitalised headquarters marks the beginning of an exciting new chapter of hybrid office design, grounding design choices firmly in research and the overarching goal of maximising employee growth, wellbeing and development. 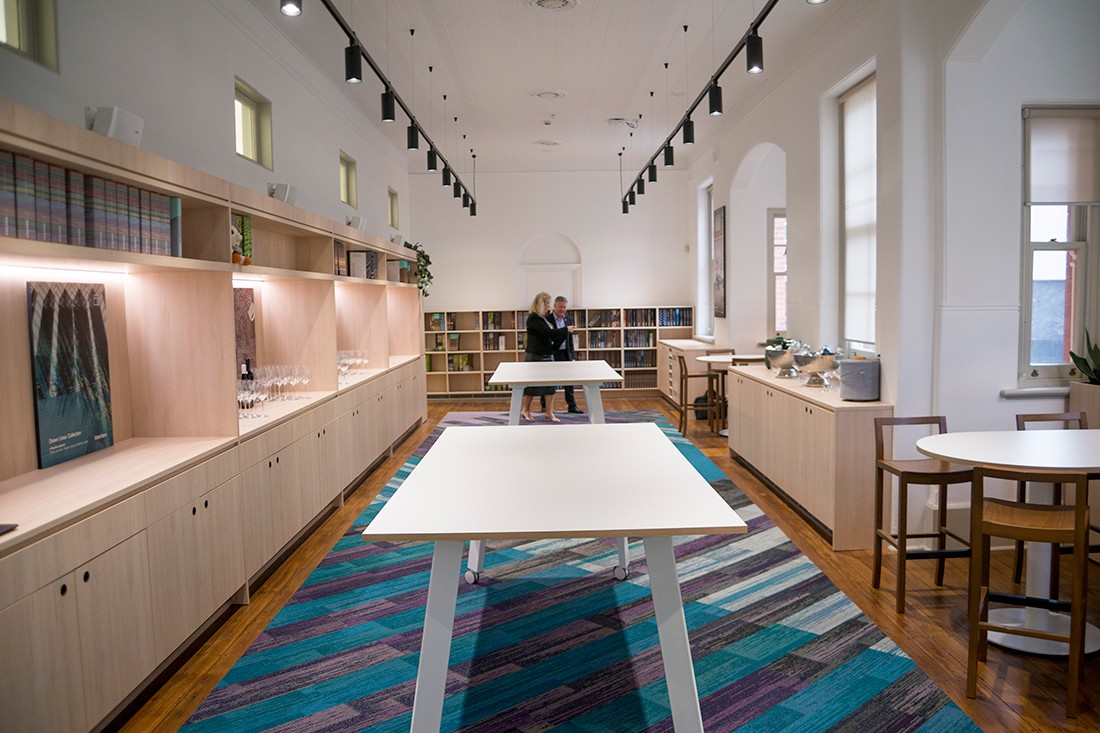 Power to our people!

“We’re putting people-first – that’s the Interface way – and we’re excited to walk into a new home that fills ourselves with pride, offering a truly end-to-end brand experience for our clients too.” – John Richardson, Vice President, Interface AU/NZ

“Our people”, as always, were the key driver of the redesign, which focuses on delivering and balancing the needs of both clients and Interface employees and supporting each individual’s unique working styles. Knowing that this creates the conditions for optimum creativity, the design seeks to augment innovation and positivity among its varied users. 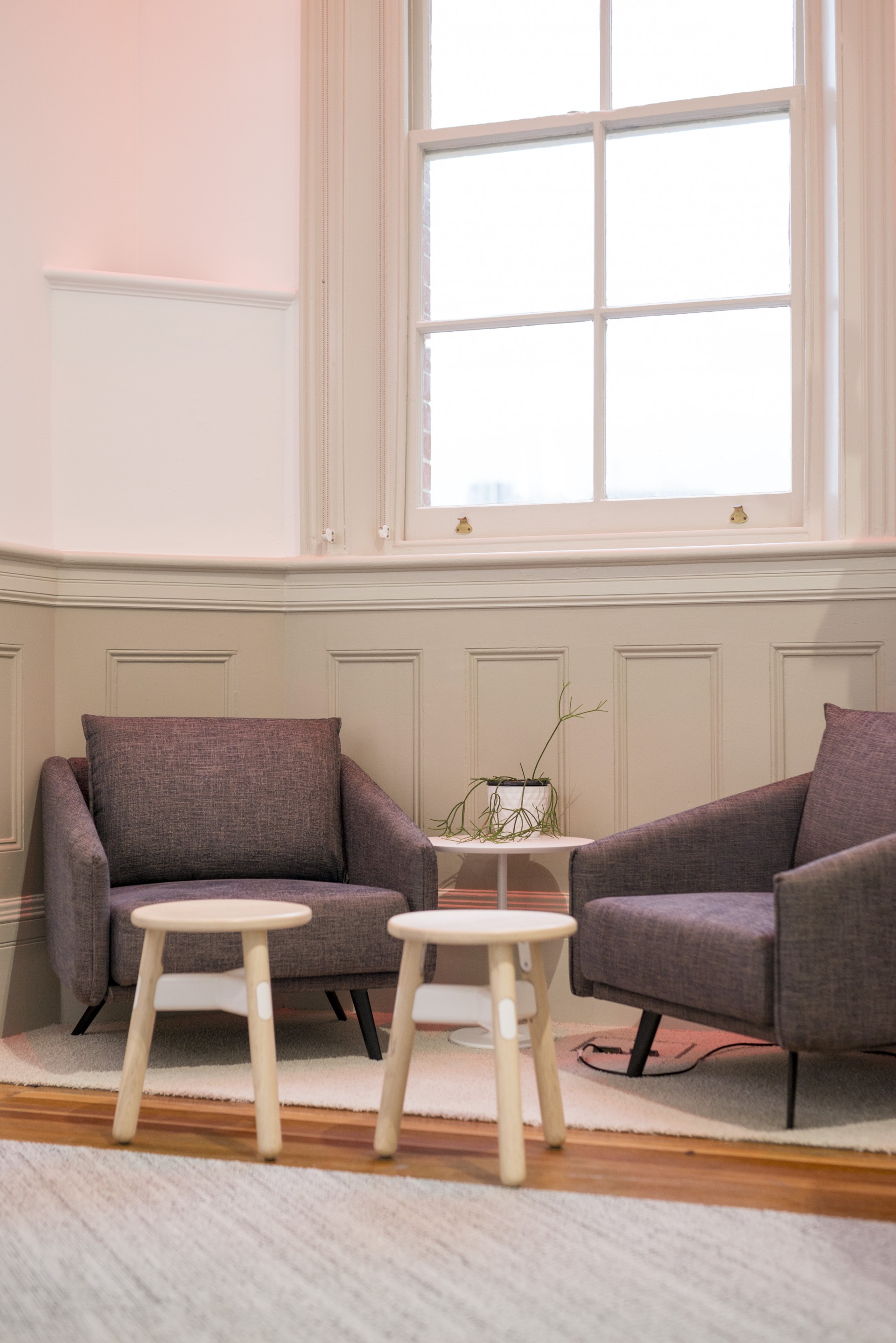 Far from imposing a new vision for a new home, Interface worked closely with each intersecting department in the Sydney team to identify each individual’s unique needs and working preferences. “The design is driven by individual working styles,” says Richardson, “Too often we find that these heavily Activity-Based Working (ABW) or even agile fit-outs for a pre-existing team can sometimes alienate them. ‘Agile’ sometimes offers nothing to help some people. We decided that we needed to respect the diversity of modes of work that our people prefer and feel most confident in.”

.
“The design for our new Sydney home presents a great opportunity for Interface to be the driver of change that it wants to see in the world. By creating an environment that seeks to support users and their performance, we’re also shoring up the ways in which we all live, play and work. We’re leading by example, and look forward to building a new culture of best-practice.” – John Richardson, Vice President, Interface AU/NZ
.

Because Interface was looking to support each individual and their unique needs, right at the briefing stage, the company interviewed all Sydney staff to understand the challenges associated with their current work environment, identifying areas for change, support and improvement. In the true spirit of +Positive spaces™, these findings were put into play at the earliest stage, directly impacting the eventual design. The layout of the building – which placed the showroom atop ground floor office space – was flipped, with working spaces distributed across the building’s three floorplates to facilitate different work needs throughout the day. 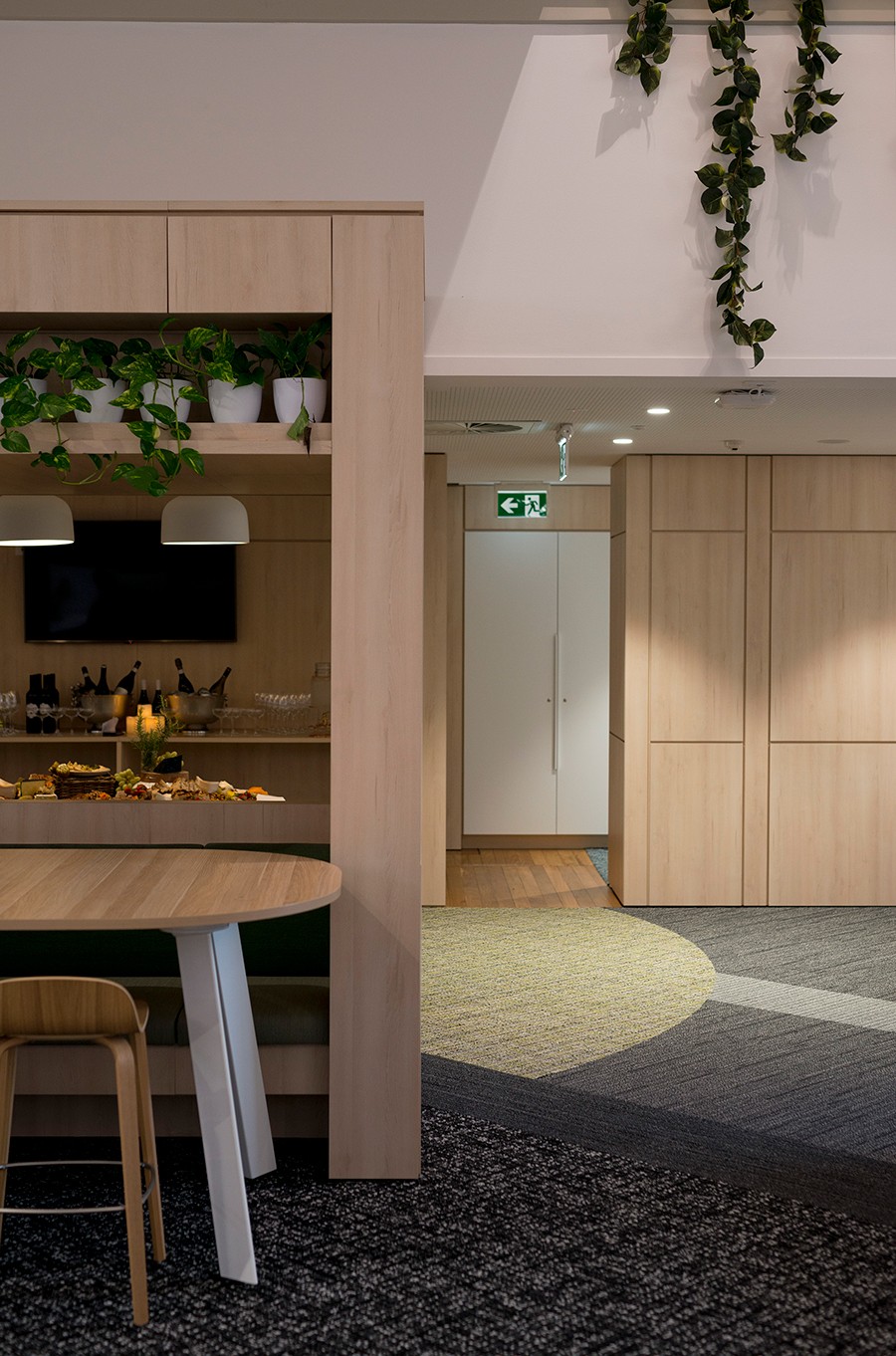 Workstations, quiet spaces, collaborative spaces, and private areas were integrated throughout the interior space, “breaking up the silo” and eroding the divide between showroom and offices as well as client space and staff space. The result: the entire building is now a showroom. 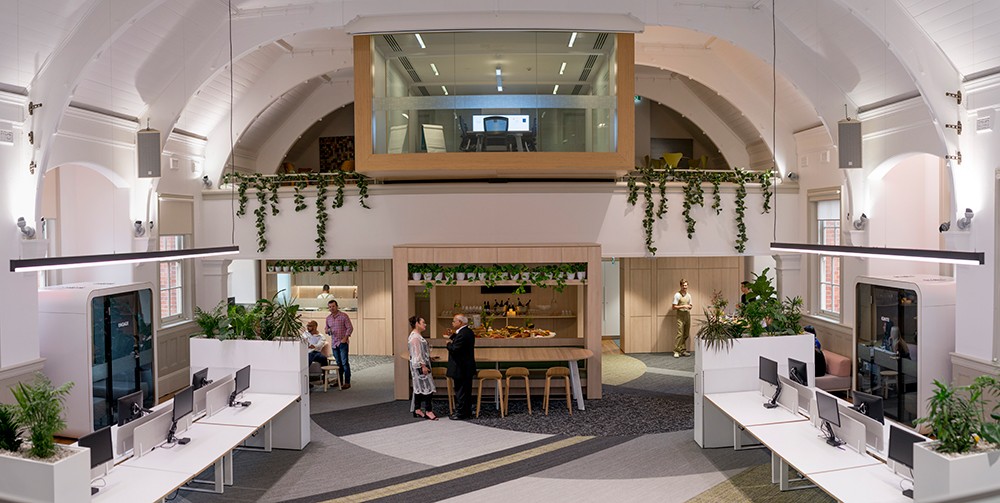 For nearly a decade, the Interface team has called the former Railway Institute Building its Sydney home, situating the headquarters at the juncture between Sydney’s heritage and modern precincts. This location is fitting, given the brand’s belief that bold innovation arises from the lessons of the past, supported by the technology of the future. The company has grown and developed significantly over the past ten years, and an update of the HQ to reflect this growth was welcomed.

The renovated HQ also maintains the strong sense of place embodied by the existing building, which is an amalgamation of a three storey, red brick and sandstone edifice dating back to 1891 and an 1899 single-storey structure. Honouring the rich cultural and historical significance of the building while complying with all Green Star requirements, it is hoped that the HQ will become one of the first heritage projects to receive WELL Building StandardTM  recognition. 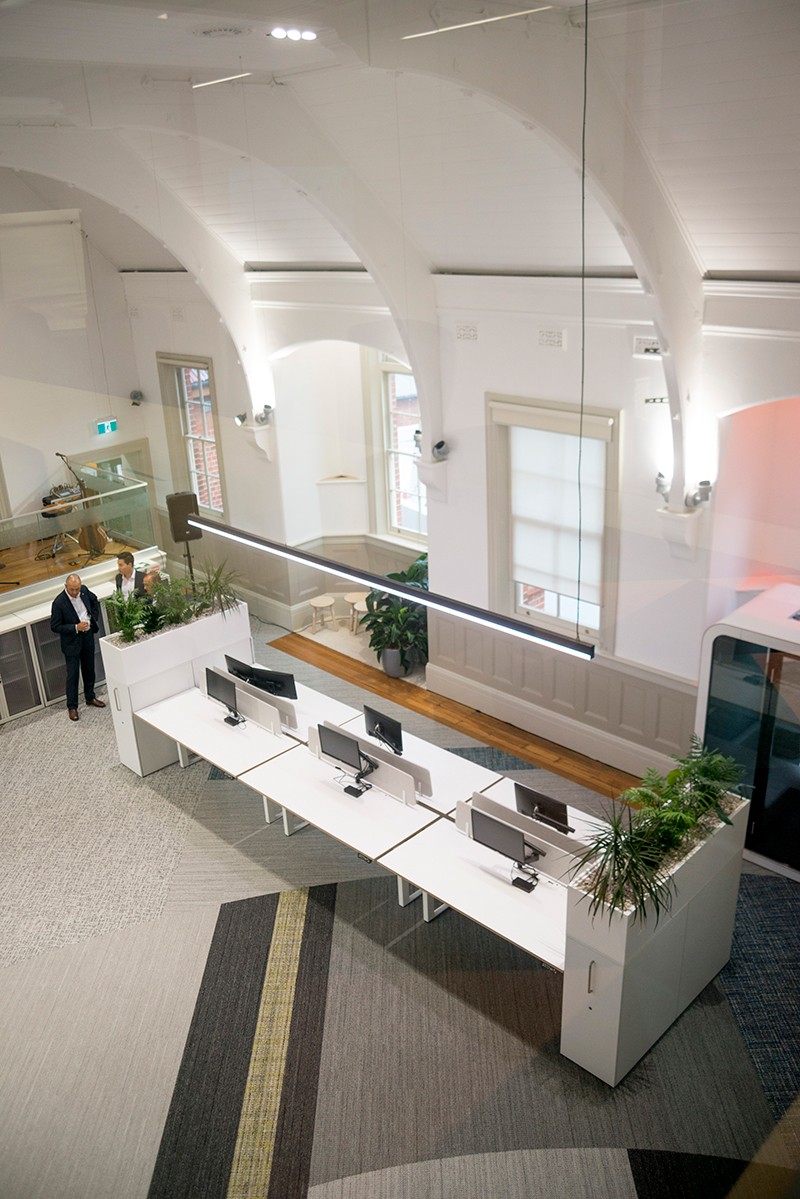 From the outset of the project, the team at Interface held a strong desire to reimagine the ‘showroom’ concept, softening it with a health- and positivity-focused approach. As a result, the new HQ offers all a place to experience Interface products and developments, taking the best from contemporary commercial design to create a space that is both sustainable and inspirational for the Interface family of staff and clients alike. 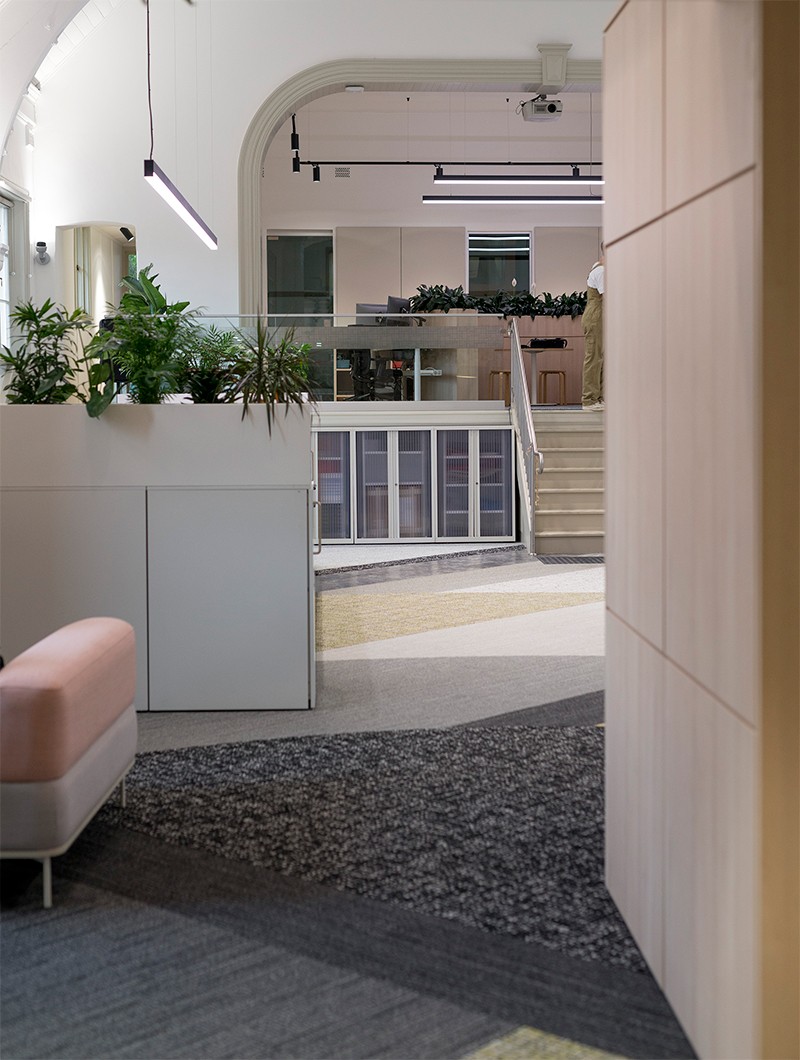 For its clients, the focus is on a strong “sense of arrival” that clearly establishes Interface’s brand identity, and its values and offering from the very first step into the new Sydney home. A “living green wall” atop the central stairs encapsulates Interface’s ongoing commitment to sustainability, a love of biophilia, and the centrality of a healthy environment to the success of the design. Beyond this, the amply lit, uncluttered combined office and showroom is a clear visual manifestation of a holistic, organised, well-considered philosophy of design. 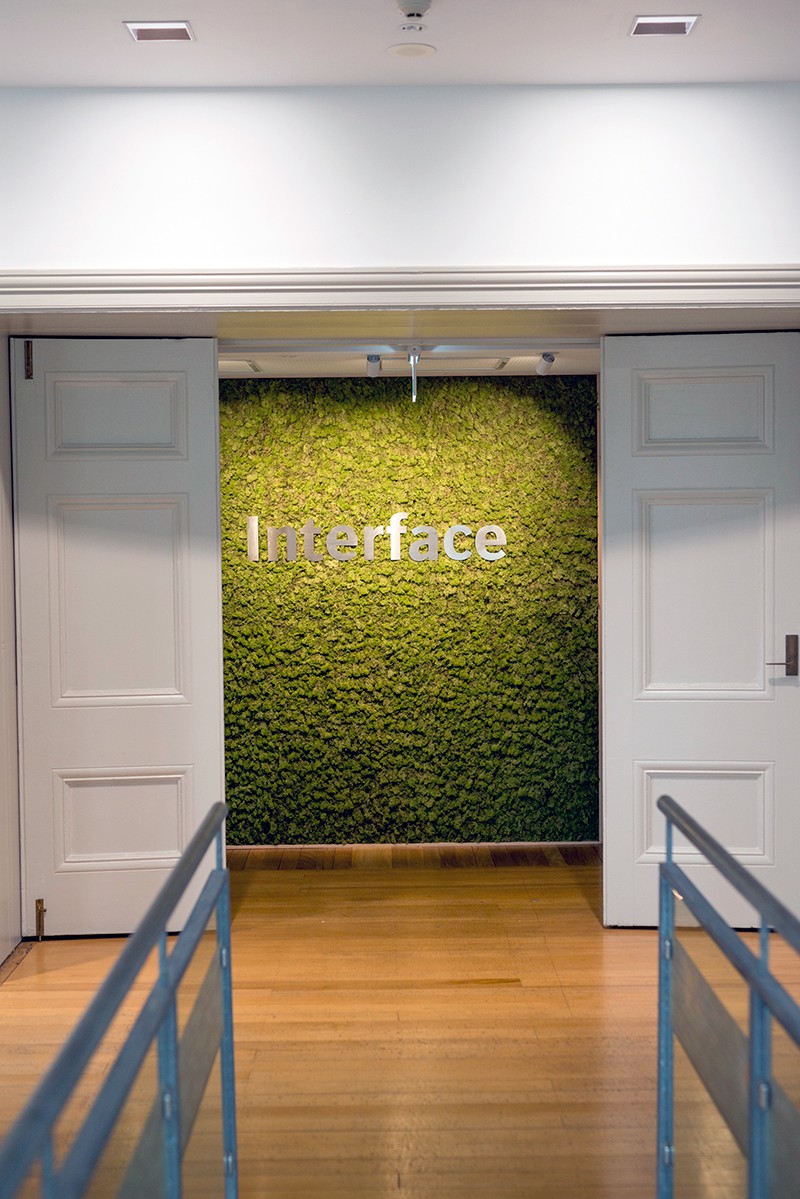 To lead and to learn

In the age of the increasingly savvy and environmentally-conscious consumer, it’s no longer enough for companies to tout a sustainability mission without themselves taking demonstrable steps toward leading by example. With the reinvigoration of its Sydney HQ, Interface performs a real-life exemplar of the company’s +Positive spaces™ ethos – being the change its wants to see in the world. 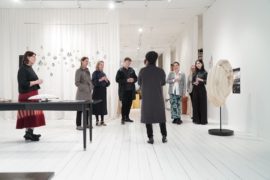 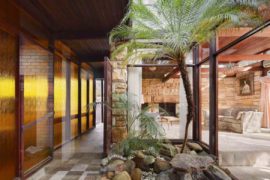 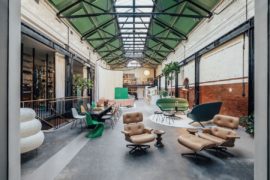 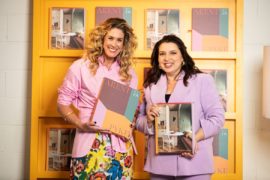