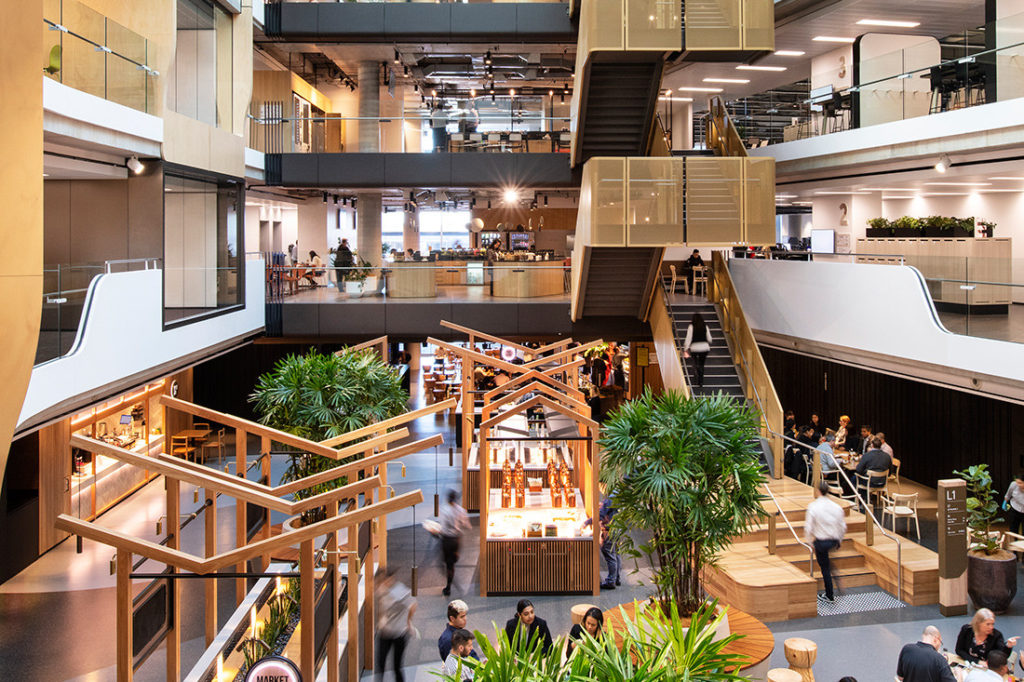 South Eveleigh is part of what was originally called the Australian Technology Park. Positioned on the periphery of the Sydney CBD, adjacent to Redfern railway station, it is the site of the old locomotive workshops.

Over recent years these buildings have been re-purposed to house tech companies and start-ups. The site is actually divided by the railway lines. The northern precinct is now a largely cultural area, while the southern precinct is being re-developed as a kind of ‘tech-city’ comprising re-purposed railway workshop sheds and nine new buildings. 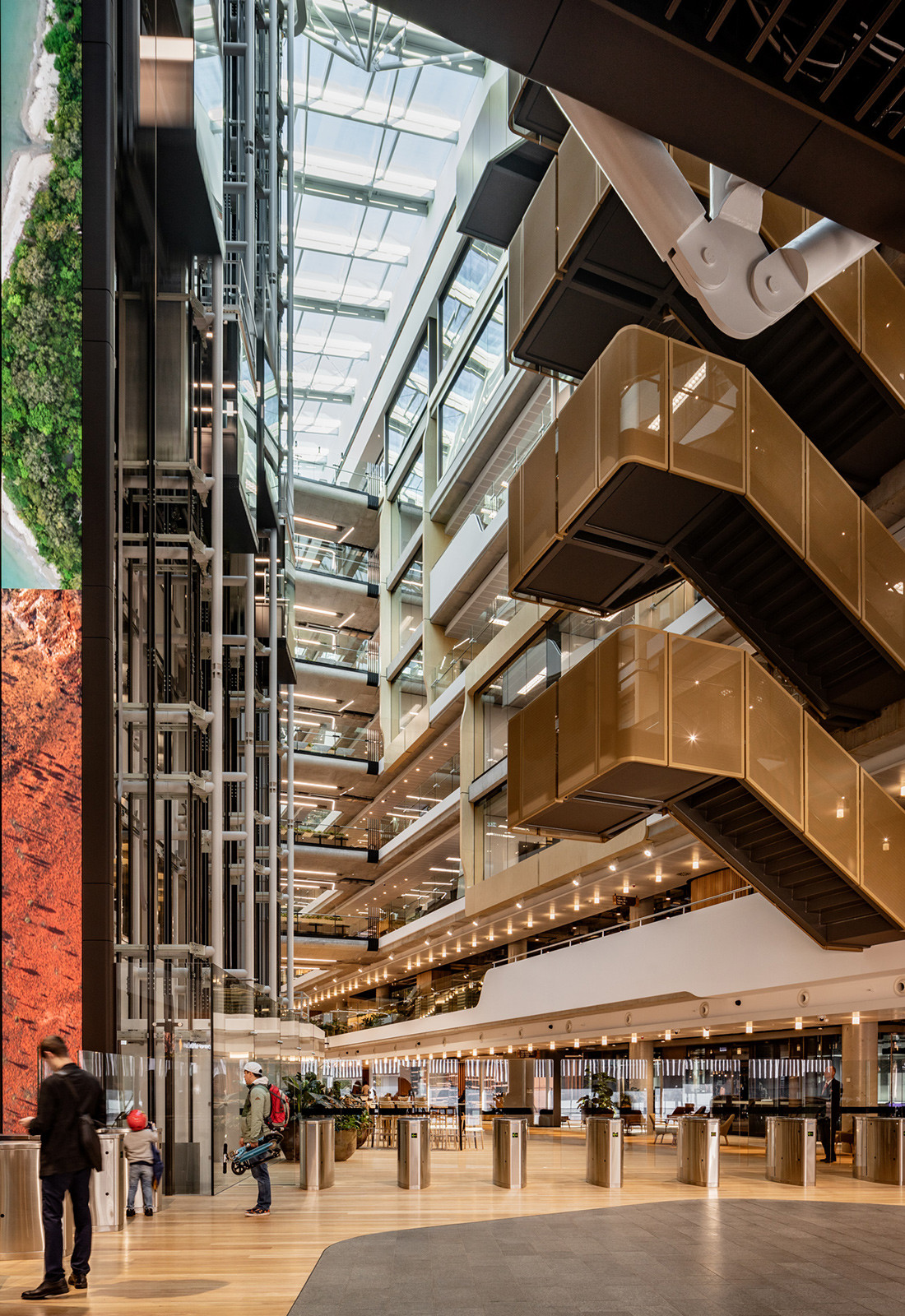 The project is being undertaken by a consortium led by Mirvac and embodies the idea of a complex, once in the forefront of industrial innovation, now re-born as a hub of innovation in the hi-tech era. Not just that, but it takes the idea of digital connection to a new dimension with a masterplan which aims to connect the precinct to the existing suburban fabric surrounding it and to the 7000-year inhabitation of the area by the Gadigal people.

South Eveleigh will be a porous destination – and not just for the day workers who commute in and out, but for the local community by offering extensive retail amenity, cafés, restaurants and recreation facilities such as a scooter park, basketball courts, tennis courts and gym. 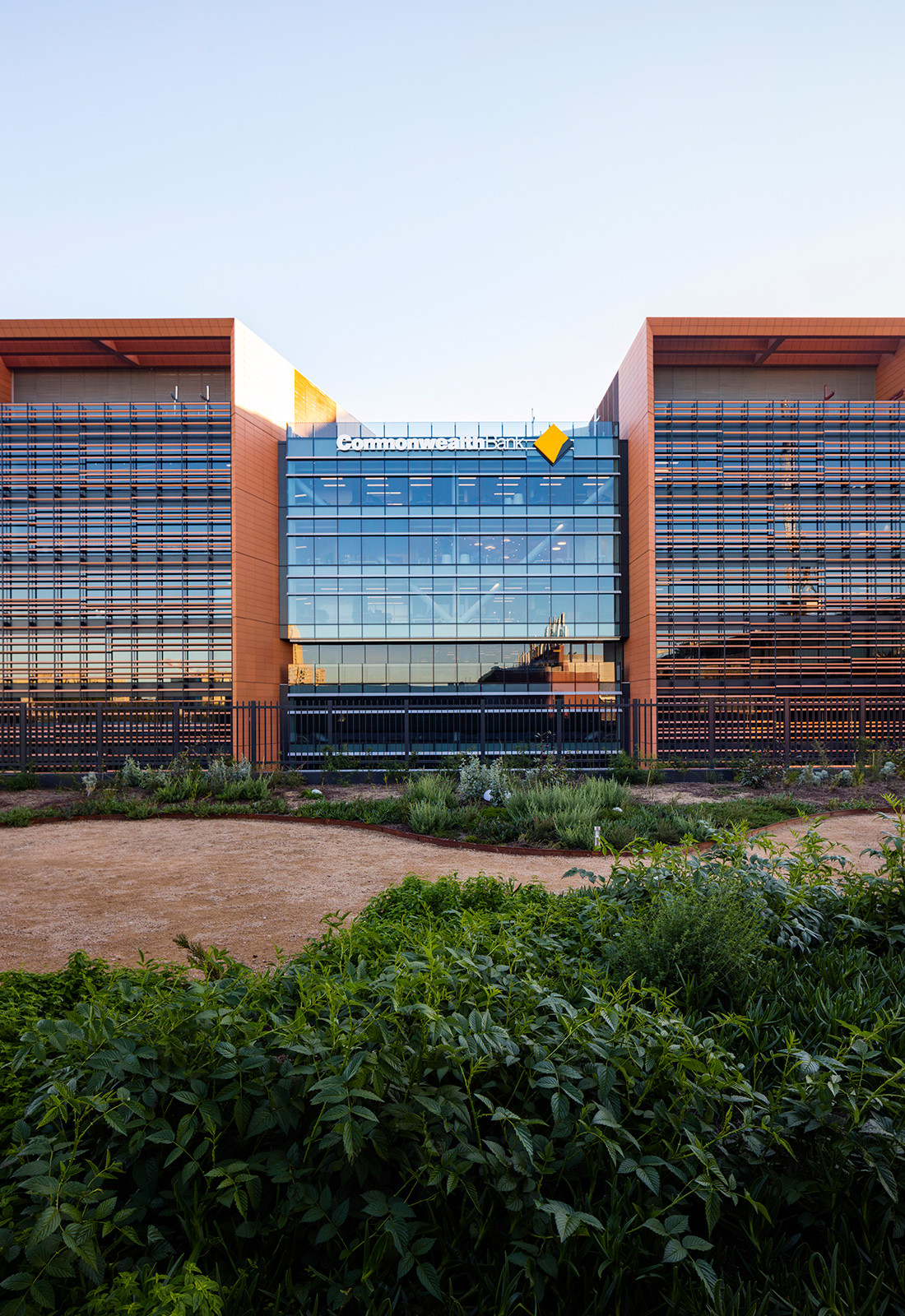 Exterior of the CBA Axle Building. Photography courtesy of Mirvac.

The Commonwealth Bank has now opened the first of two new buildings there – the 7-storey Axle campus, opposite Yerrabingin, the 3-storey community centre which offers and café and retail amenities on the ground floor, community facilities (including a CBA-sponsored childcare centre) above that and a rooftop garden with 2,000 edible and medicinal plants overseen by the local indigenous community.

This is very much an exercise in placemaking, both inside the buildings and with their context. Jennifer Saiz (CBA Executive Group Manager, Group Property and Security) points out that part of the brief was to ensure that this place was activated 18 hours/seven days a week.

“It needs,” she says, “to be a destination. The best tech precincts are the ones that are vibrant and alive. Getting the right retail mix means it’s a drawcard not just for the people who work here, but also for the community.” 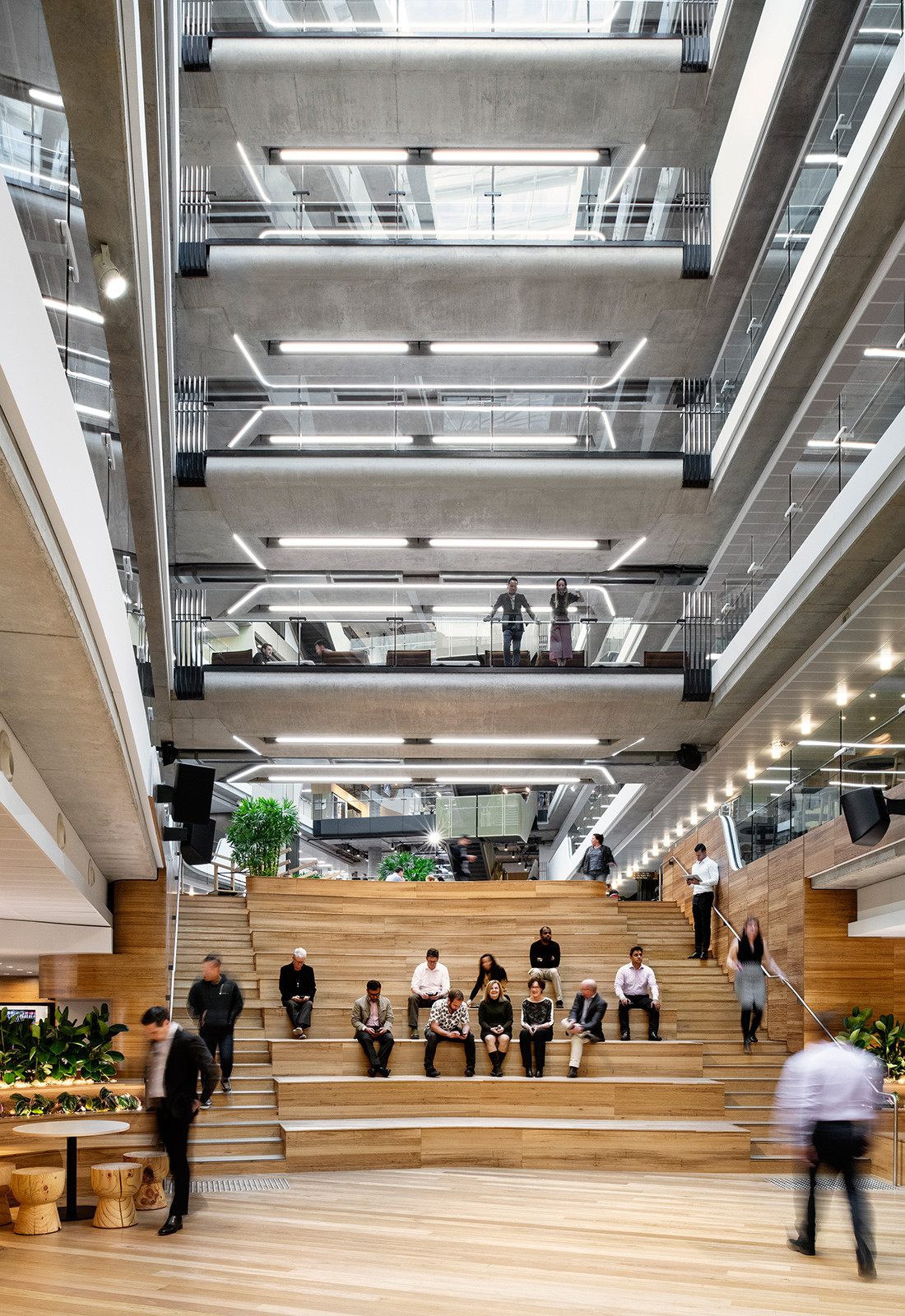 Saiz points put that the CBA is in the process of re-positioning itself as a digital leader and the Axle building has been developed as the smartest of smart buildings. At the same time it is also a very human building – in terms of scale, architectural strategy, amenity and workplace philosophy.

“We had scale,” she says, “and we wanted to utilise that scale to create a world-class campus environment. We had opportunities in many different locations and this one fitted the scale we were looking at – about 10,000 people. It was a real campus offering (others were more high-rise offerings which couldn’t fit all of our people), but also an ability to really create a sense of place. It was the perfect opportunity for us to not only create world’s best practice in terms of work space, but to centre it in a location that was completely aligned with the vision of the organisation.” And, she adds, 96 per cent of their workforce can catch one train to Redfern. 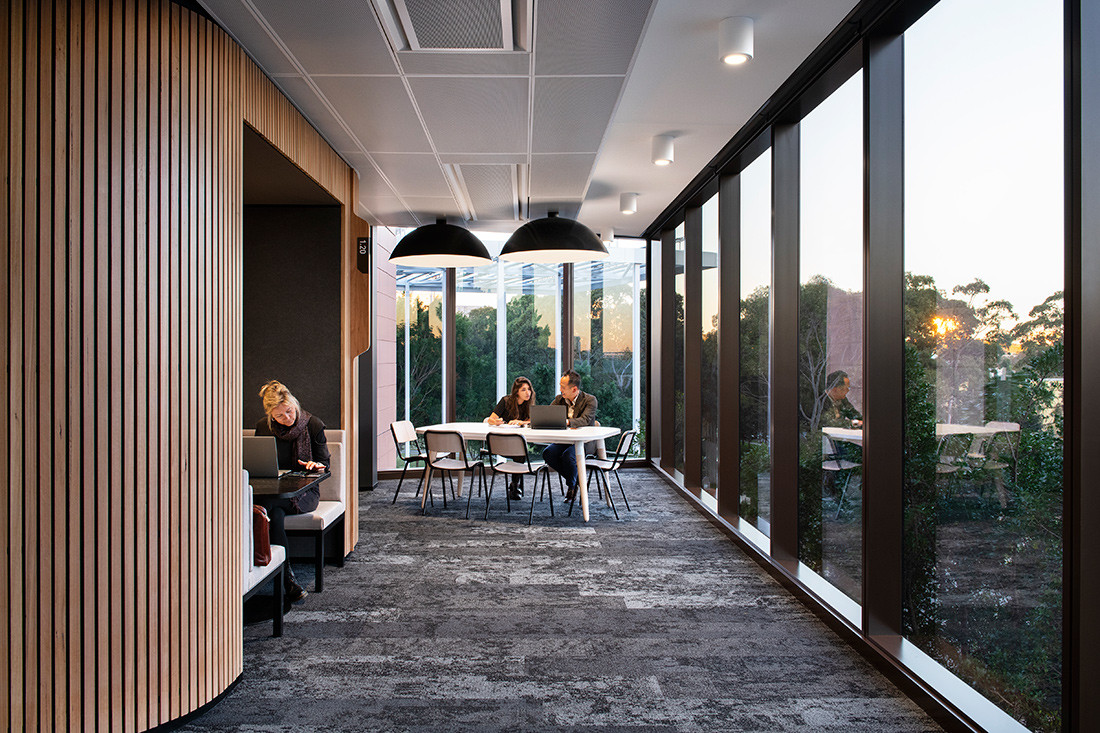 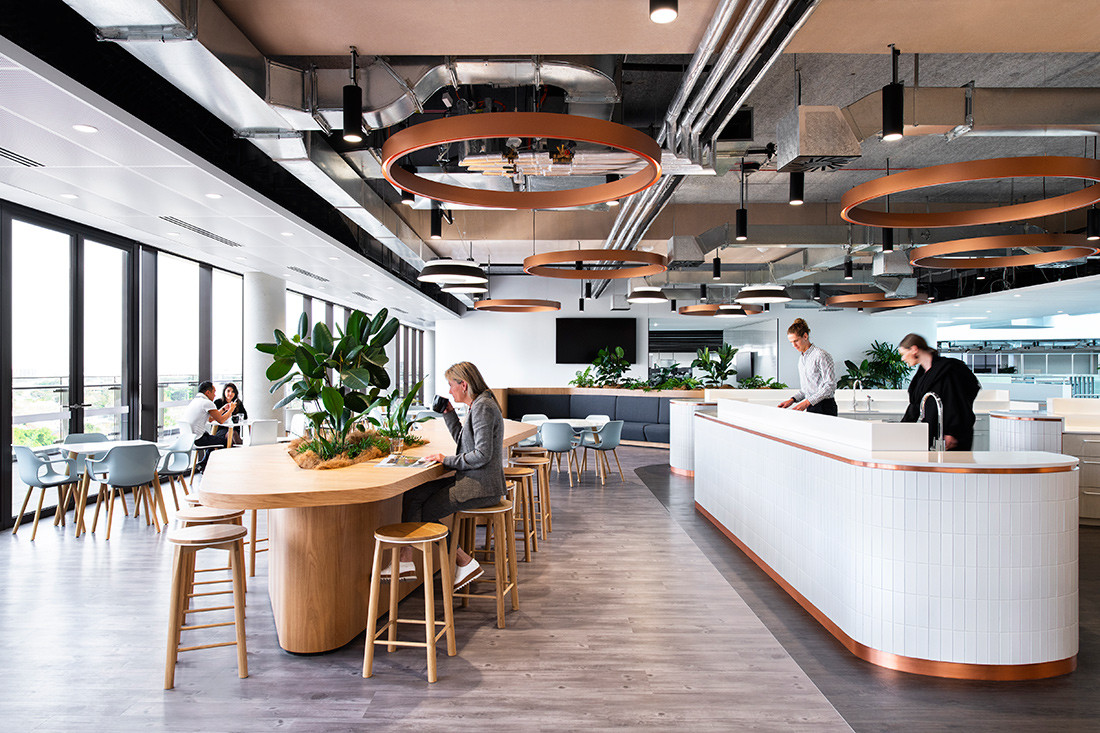 Cafe and breakout space in the office of the CBA Axle Building. Photography: Nicole England.

The base building is designed by fjmt who collaborated closely with interior architects, Woods Bagot, especially on the atrium space which is a striking evolution from the earlier Darling Harbour and Olympic Park buildings. CBA sees the atrium as a generator of connectedness and collaboration.

What’s striking about Axle is that rather than a monolithic reveal-all-at-once experience, it reveals itself only as one moves through it. It also softens the 5,600m² floorplates, helping to give them a human scale. 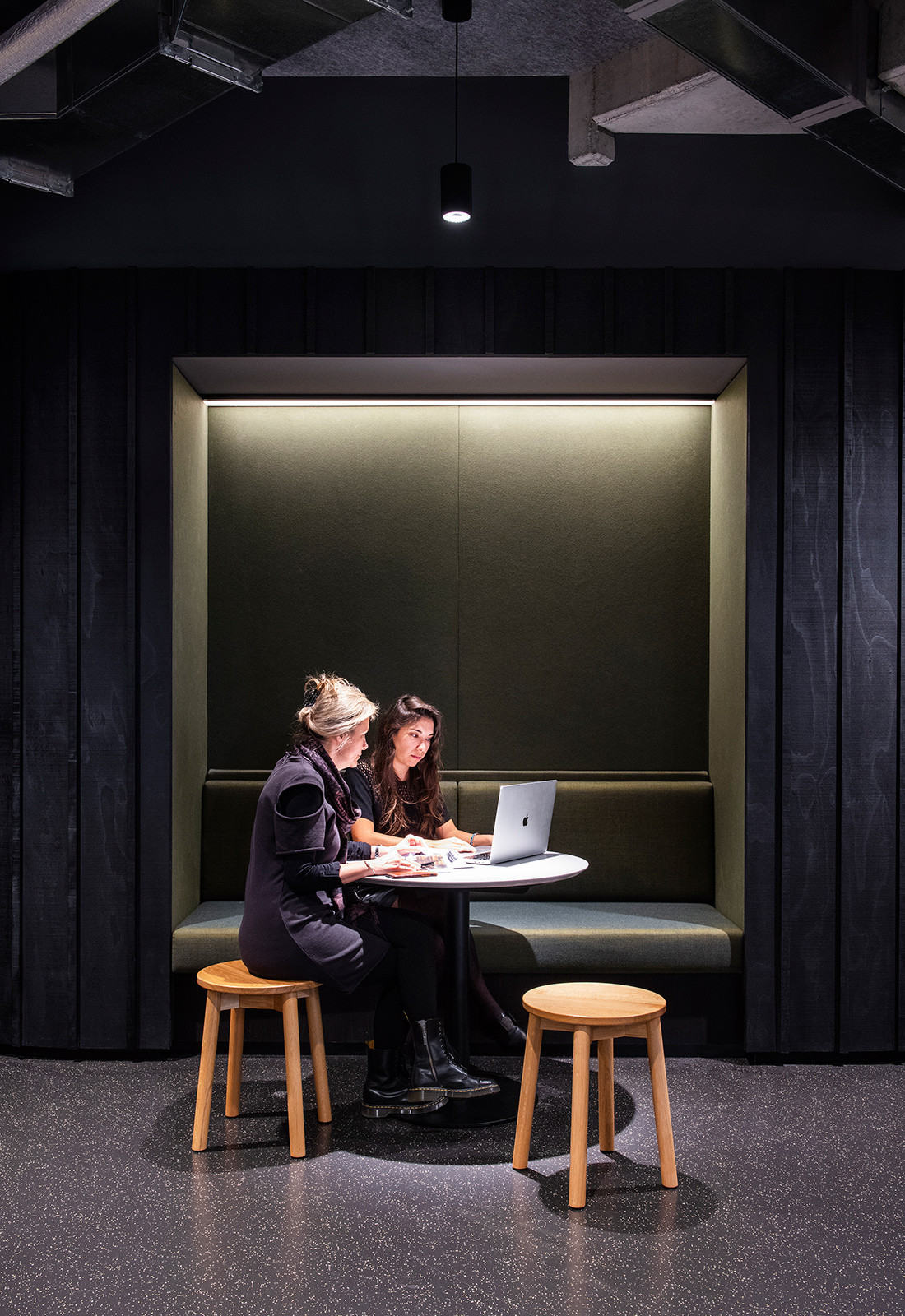 The collaborative design of the atrium edge saw open collaborative spaces, recessive meeting rooms and expressed timber meeting room pods brought towards the atrium, enabling more varied circulation spaces. It is all part of a strategy to achieve flexibility in the work environment not through diversity, but through simplicity – a strategy epitomised by having separate sitting and standing workstations rather than adjustable ones – a lesson learned from the past. 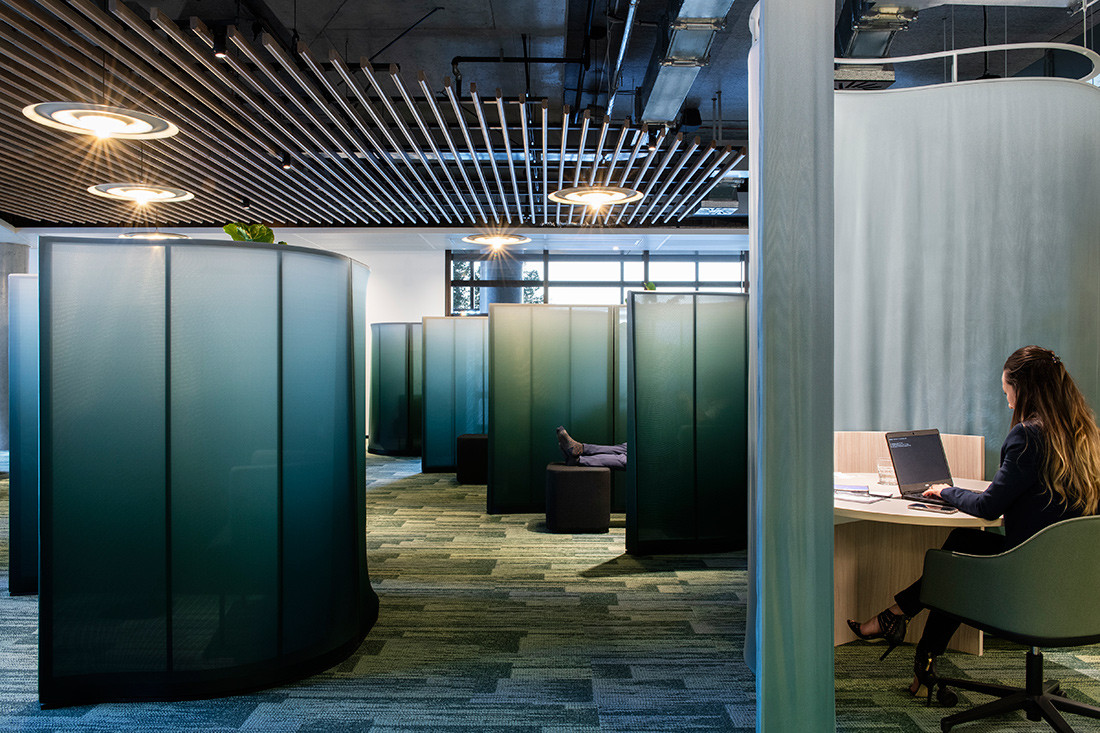 Also simplified were the work settings. The periphery provides ‘me settings’, then come the ‘we settings’ (you with team members and other people), then as you get closer to the atrium it is ‘us settings’. Digital whiteboards are central to the way the CBA team-based strategy works, but they also serve to break up spaces and create scale.

Axle, says CBA, is a building focused on “teaching, development and spaces that are focused on intellectual exchange”. The collaborative spaces flow easily into the more focused spaces on the periphery, as do the various work settings. On the upper ground level, for example, is the Club space, rather like a business lounge. This offers settings for quiet, contemplative work, a tech-free retreat with calming ambient music. Then, at its edge, it eases into a café area with settings for informal meetings. 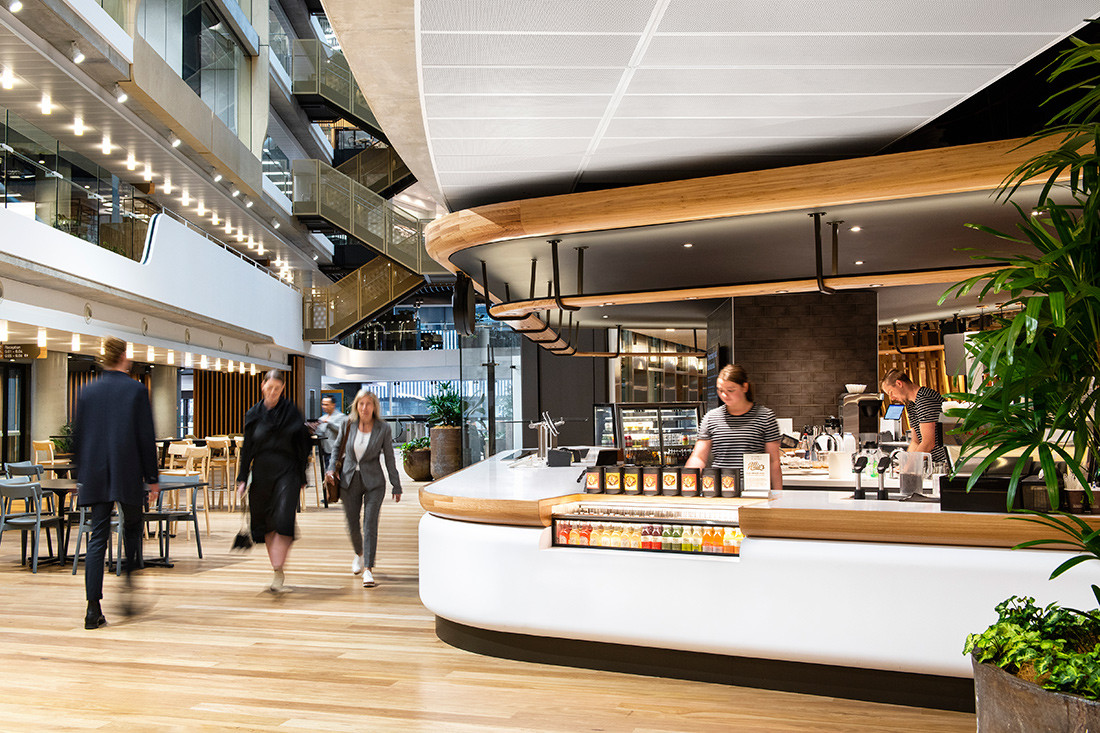 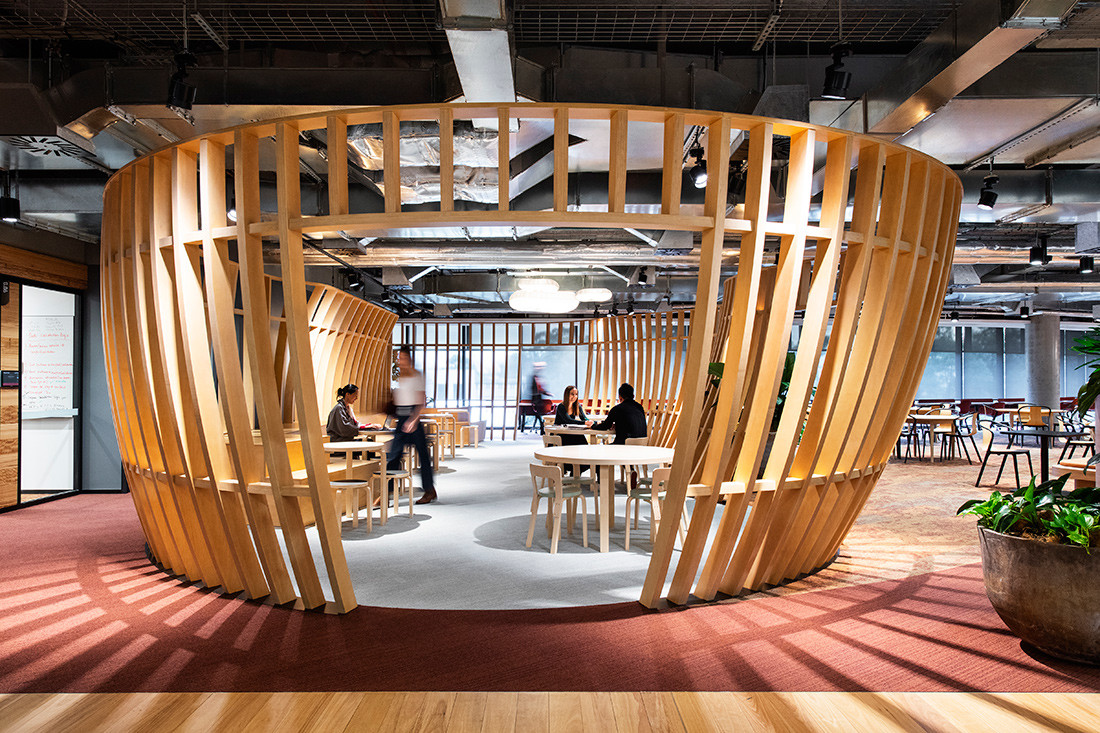 The Boab adding to the diversity of multifunctional and social settings within the Club environment. Photography: Nicole England.

But, in this building, the phone is key to everything – providing access to the building, finding a vacant space, finding a colleague, reporting a fault or activating a locker. Welcome to the connected workplace. 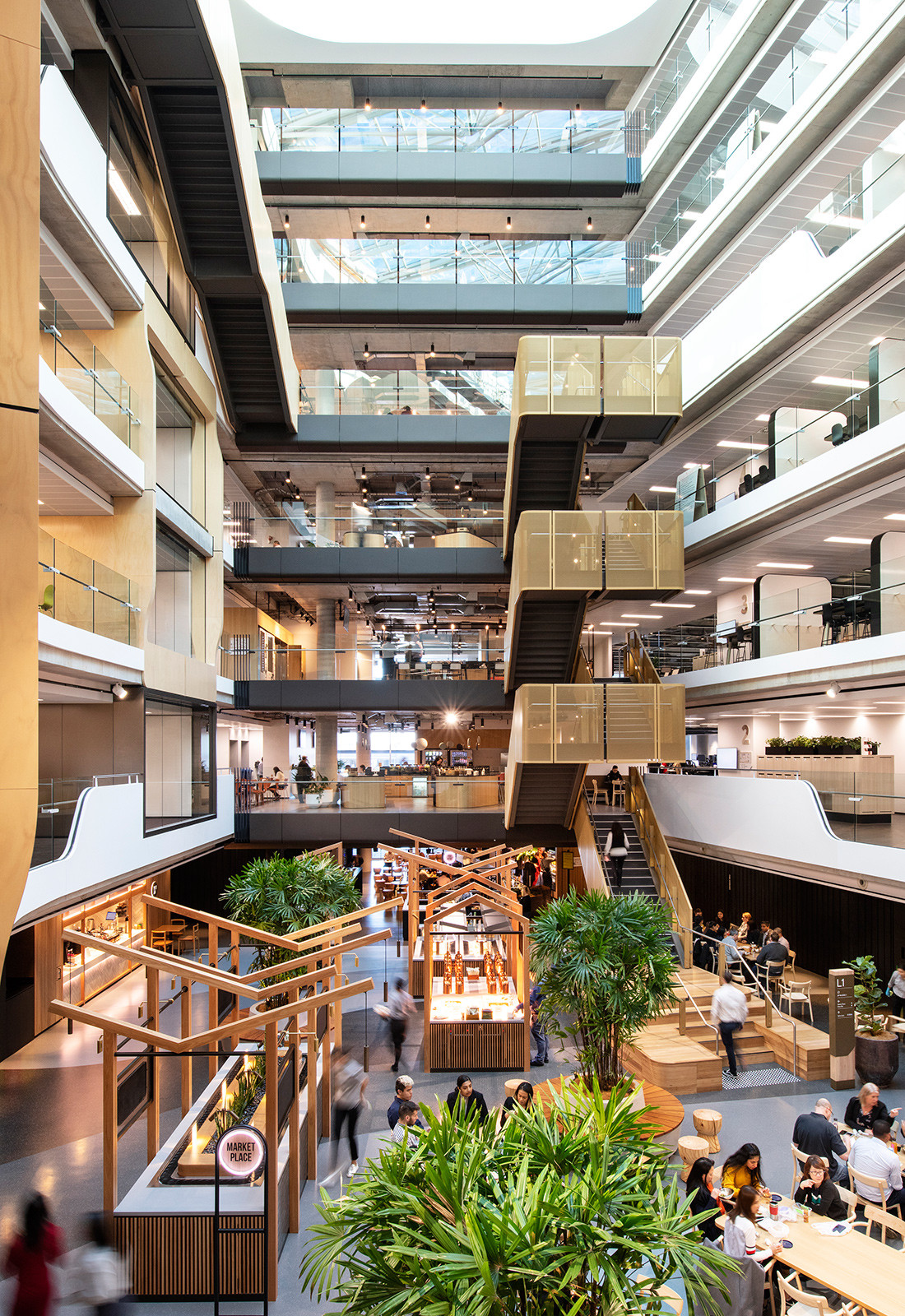 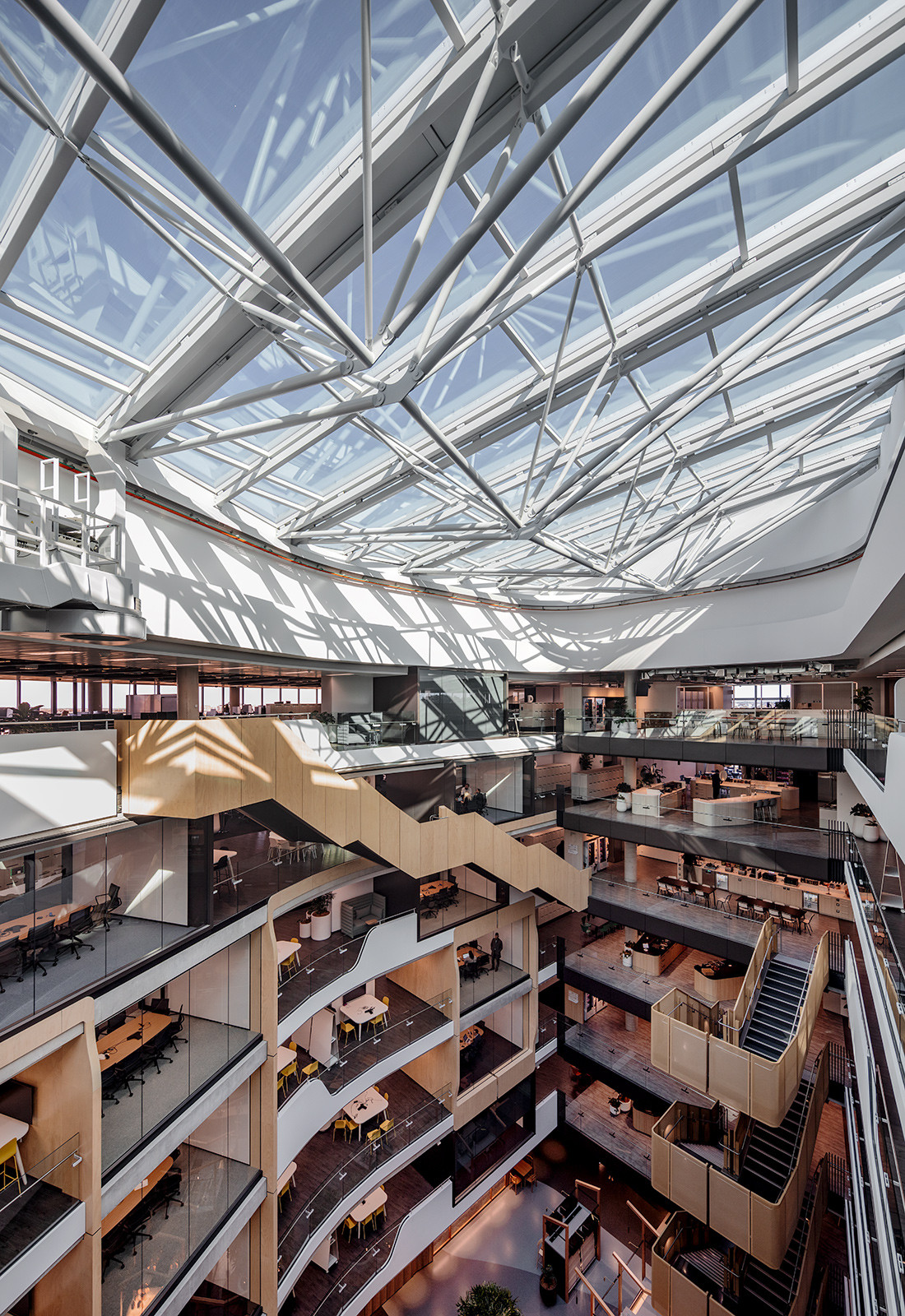 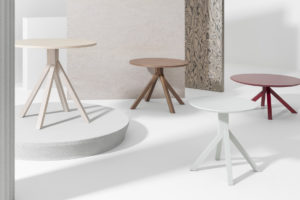 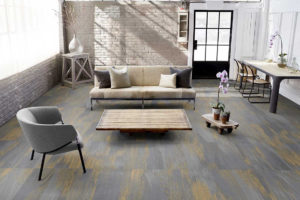 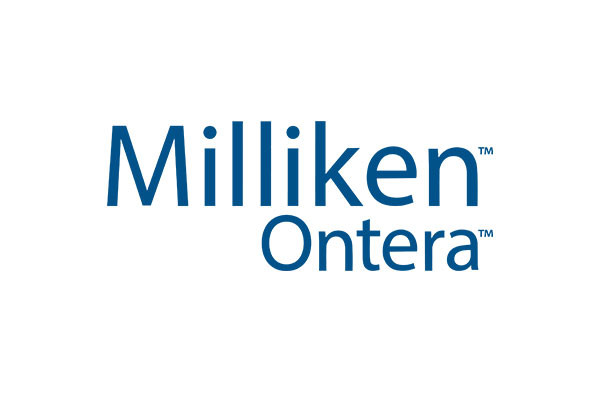 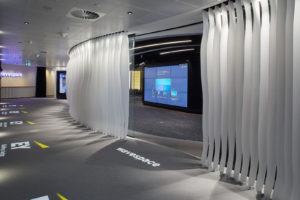 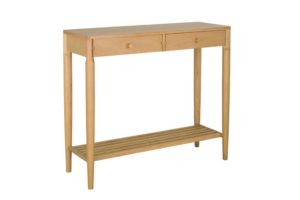 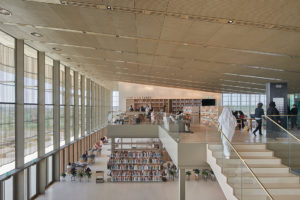 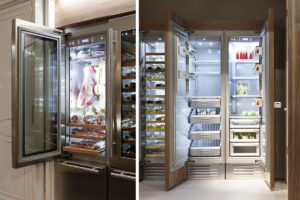 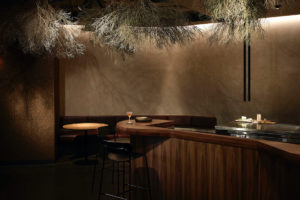 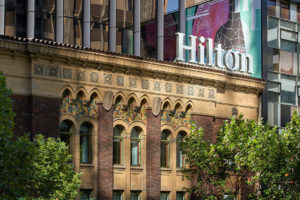