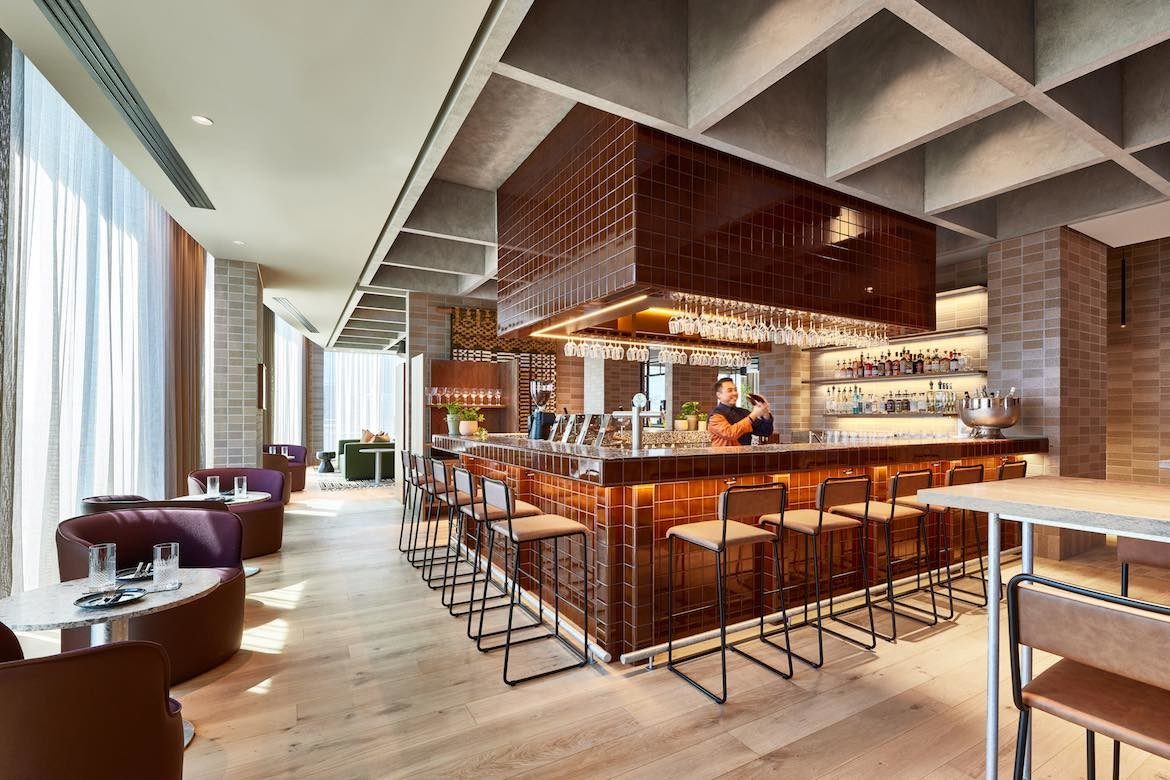 Architectus and Hecker Guthrie have teamed up to deliver Australia’s first Hyatt Centric on the corner of Melbourne’s Downie St and Flinders Lane, just moments from the heart of the city’s laneway district.

The Melbourne hotel is the first of its kind in Australia; a rendition of the Hyatt’s ‘Centric’ model that focuses on hyper-localised design. In keeping with this goal, the hotel displays a delightfully curated sample of the city’s design, art and food.

Taking cues from Melbourne’s infamous laneway culture, the entrance to the hotel is understated. A large timber door slides open, ushering visitors down a softly lit corridor, reminiscent of the city’s concealed bars and restaurants. A piece of neon art brightens the way, drawing visitors towards the lobby.

“Like Melbourne, the design is neither brash nor ostentatious, it is subtle and sophisticated and waiting to be discovered,” says Architectus principal architect Matthew Smith.

In the lobby, stack-bond blonde brickwork lines the walls and floors and the large windows are framed in black steel, both references to the industrial history of the area. Custom hand-weaved rugs lie underfoot and hang from a wall in the lobby, a nod to Melbourne’s history of wool production.

“We celebrate Melbourne’s unique history through the careful selection of artisanal objects across the hotel, including curated artworks and Gold Rush-inspired lighting and objects by Volker Haag and Suzie Stanford,” says Hecker Guthrie associate Stacey Van Harn, interior designer on the project.

Custom brass Australian animal sculptures by Stanford are playfully placed, sitting high up in the elevators and acting as handles on major touchpoints, including the entrance to the conference and function rooms.

Art plays a crucial part in the Hyatt Centric and local pieces throughout the hotel were curated by Sophie Gannon.

The hotel includes 277-room rooms over 20-storeys and features a pool and gym which, rather than being hidden away in a basement, have been elevated to the fifth level, allowing gym users views of the city.

The pool is an enigmatic, softly-lit space that is open from 5am to accommodate early risers, and food can be ordered to the space. The anticipated rooftop restaurant and bar, TOMA, has sweeping views across the city.

“The views from the rooms are beautiful, spanning Port Philip Bay as well as the grittier port and transport precincts,” says Smith.

Along corridors, small metal boxes light up when they sense movement, drawing attention to the photos they display. Exhibited inside the boxes are black and white photographs, evocative of historic film images, which depict progress shots of the excavation and build of the project.

As Architectus’ Matthew Smith explains, the entire project continually referenced the site’s history to inform design decisions, and these photographs act as a reference and record of the continuing history of the location.

The hotel opened its doors last week, with owner, Paul Little of the Little Group, painting the ceremonious final stroke on an artwork by local artist Damian Cazaly in a metaphorical ribbon cutting ceremony.

The curated design of Hyatt Centric makes it a charmingly idiosyncratic hotel, setting it apart from the cookie cutter alternatives, and providing a gateway to Melbourne in such a way that it does justice to the city.

The premium German brand Brunner has launched in Australia