Can a building revitalise a city?

The recently completed University of Newcastle campus, designed by Lyons in collaboration with EJE Architecture, brings a new perspective into the heart of a rapidly transforming town.

The original campus for the University of Newcastle is out of town and surrounded by trees. But Newcastle is a place of rapid growth and as it continues to develop its identity as a creative precinct, the university wanted to expand its campus, this time in the heart of the city.

Aleesha Callahan talks to James Wilson, director at Lyons, to get insight into this project and how it set out to revitalise Newcastle. 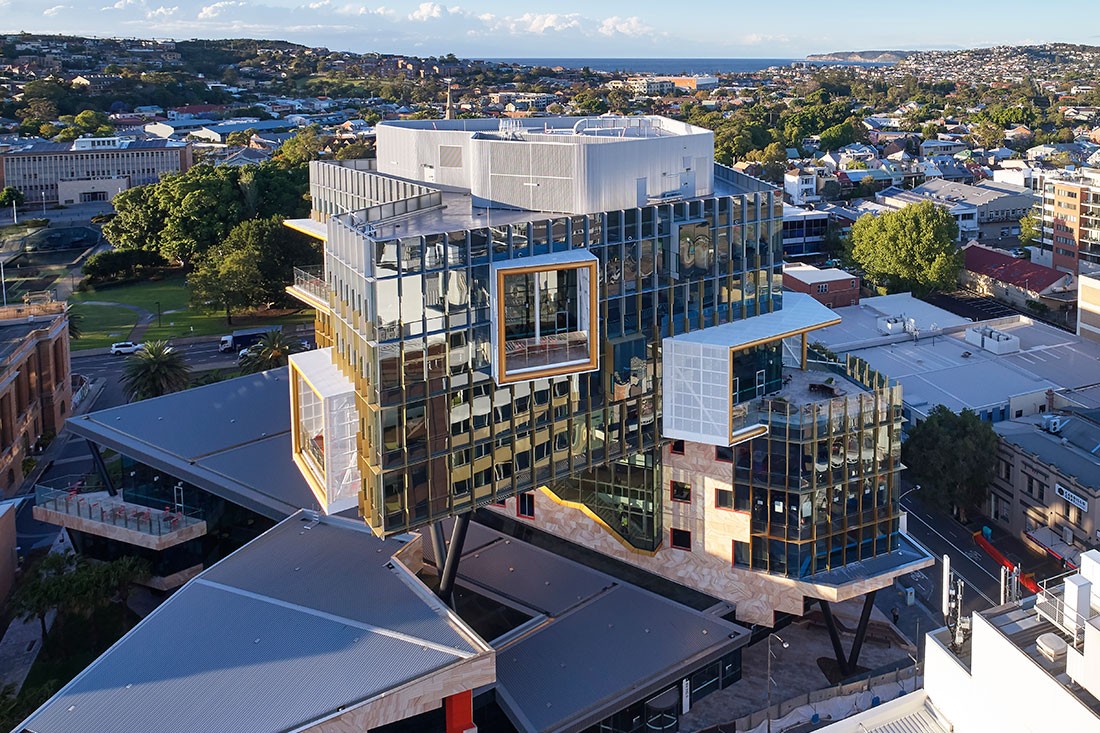 The new building incorporates ‘urban rooms’, which look out to different landmarks across Newcastle.

Indesignlive: There are a lot of universities going up across Australia, what makes this one different?

James Wilson: Universities have undertaken a huge change in their business structure over the last 10 to 15 years. Enrolment numbers have been largely deregulated and uncapped, which means universities can take in as many students as they wish, but likewise students  have more choice and power over where they go.

This choice of universities has given students the power to weigh up university enrolment choice depending on which needs and desires are met. This is something that our firm has been responding to in a number of different ways. Having done multiple university campus projects recently, it’s always been the same question – how do you attract and retain students? There’s also an emerging philosophy in a lot of universities about how to appeal to cross-disciplinary study, particularly in research.

One way to do this is to keep the students on campus, keep them discussing things, and turn them into research students. This can be achieved through creating a student experience where they’re given room and space to collaborate with each other outside of learning times, which is called a ‘sticky campus’. 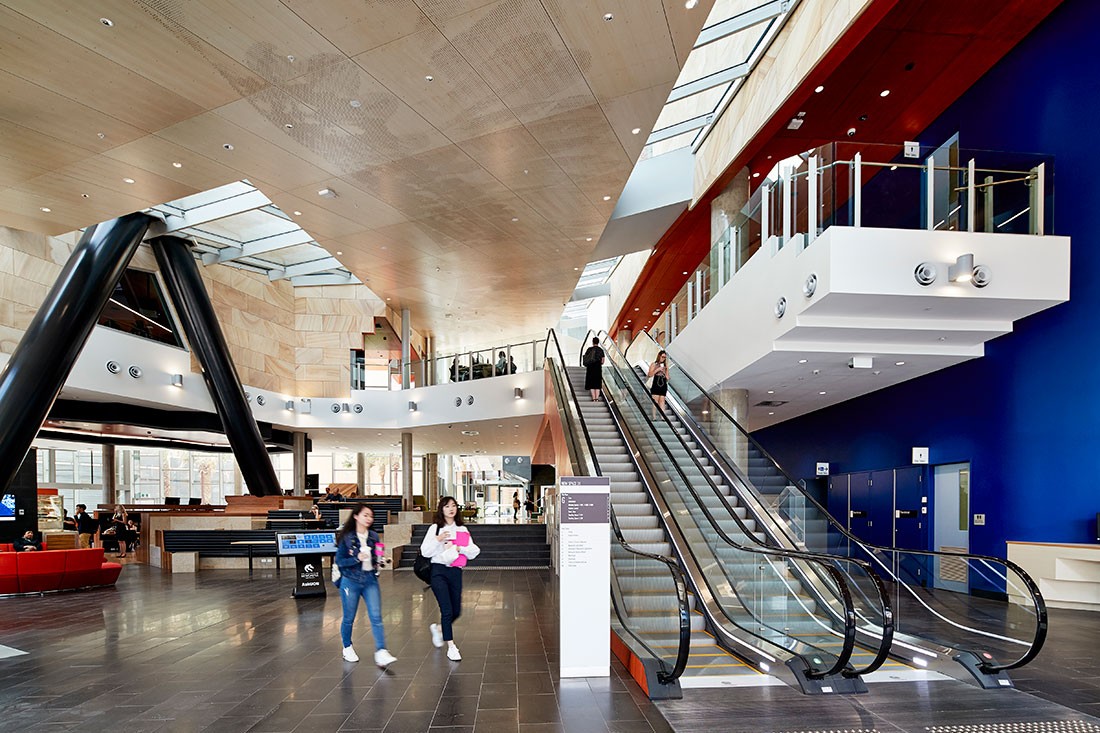 Coming back to the Newcastle University building, the first idea was to have a large and open ground-level experience. The building is tall but the ground floor has a humanistic scale; it’s all open and there are no teaching and traditional learning spaces – there’s a café and open seating, making it a flexible space for students passing through. It’s a marketplace of ideas and a space for the community, which anyone can use. So it’s a new space for new ideas, while also serving as an area to welcome people into the new building, allowing them to be participants in the creative and learning processes.

Generally, when a university expands, they’ll add onto existing campuses, but when you get the opportunity to build something new, a campus unto itself away from the other buildings, it creates a very interesting dialogue. A lot of this thought behind this building was to not only give the students the comfort and experience they want, but also to regenerate part of the city that has been in a partly derelict state.

So it was a very powerful brief to bring some of the student life into what is emerging as a creative centre in NSW. 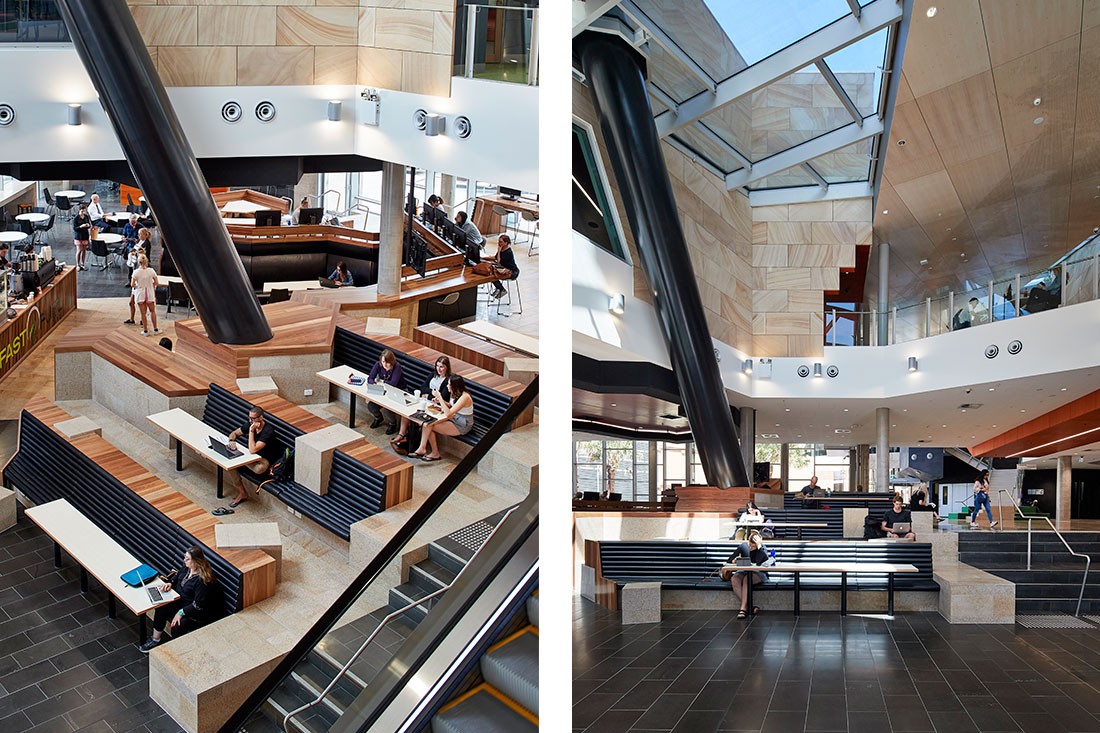 The ground floor is open to the public and offers various seating arrangements – creating a ‘sticky campus’.

The ground plane is open, like a semi-civic structure, are the public actually embracing that?

There are a certain number of architectural strategies we’ve carried out, but there are things that the university has also done that have been really clever. On the architectural side, we’ve included large sections of the façade open on the ground floor. You can enter from five different places, and it’s open most of the day and evening so you can take shortcuts from one part of the city to another.

There’s also an extension of the adjacent civic park, which has become a new walkway. We have allowed porosity through the site, so even if people aren’t heading there they’ll walk past or through it and get a feeling for the things that are going on. It’s a really simple way of allowing people to walk through the site. 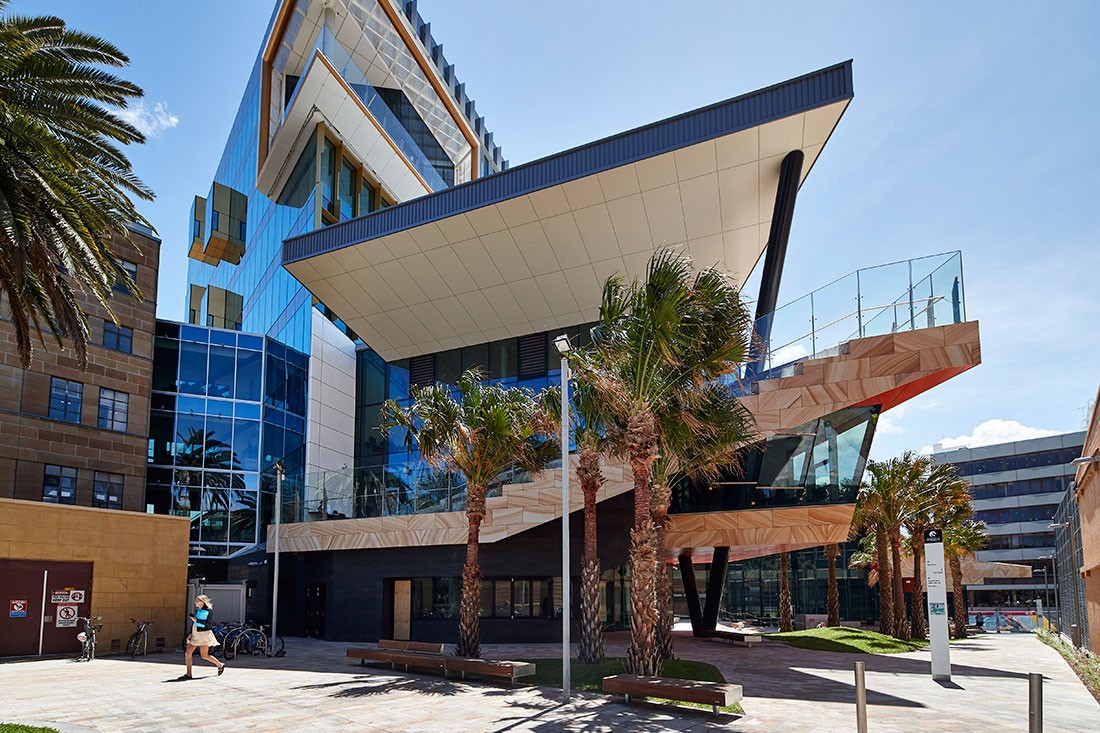 The university also carried out a whole set of open community sessions where they invited people to talks and events before the build was 100% complete. They also had a big family day where all the local kids were invited. The university tried a lot of different ways to make sure the community know that this is a place for everyone and not just students.

What role does technology play in this project? 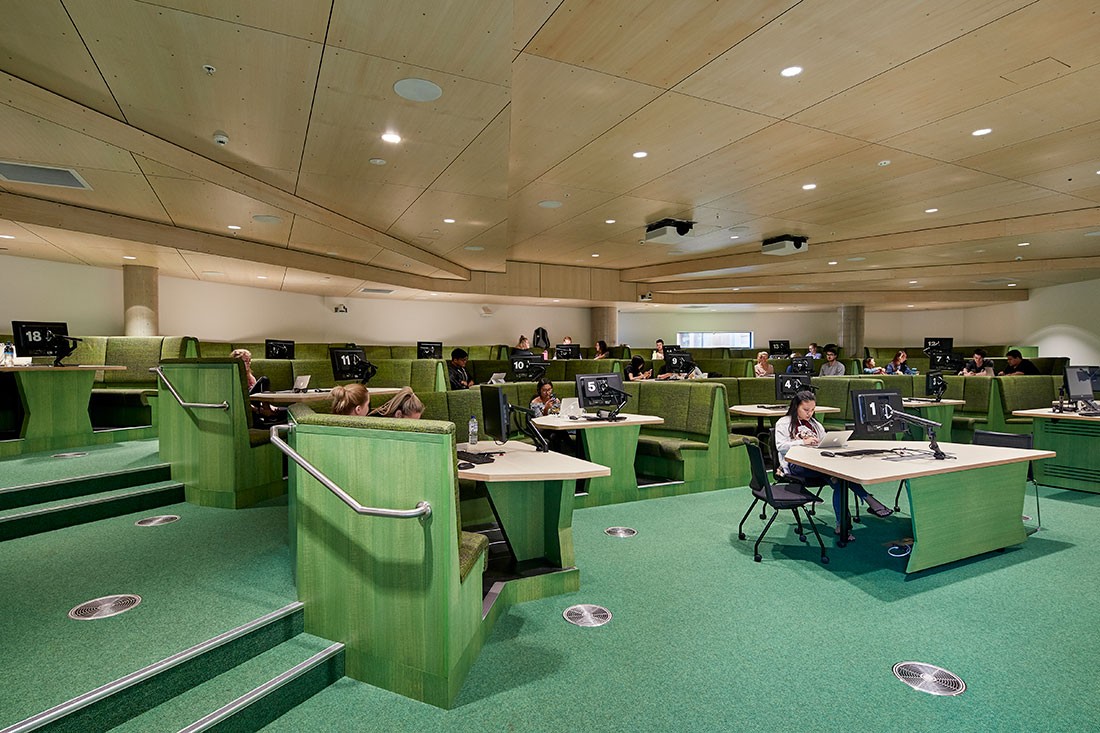 AV technology was a huge component to the teaching rooms.

For the university, technology was huge and they invested more than any other project in terms of the AV – purely because they know when you come to Newcastle you want to be connected globally.

It’s quite fantastic how the AV tech works; as a student you can connect any device, whether it’s iPhone or Android, to any of the screens in the room. You can also instantly connect to any other space within the building, or globally through not just software but AV technology. Even more importantly, there are cameras in the room that don’t just look at the lecturer but can pivot and look at any one of the tables. So if anyone in the group has something to say, other external observers can see them.

How has Newcastle’s history and landmarks been integrated into this project?

It wasn’t only that the university wanted to move into the city as a functional building, it was also a question of ‘how do you revitalise a city using a building?’ And I know a lot of architects do that in different ways and will often talk about how their building regenerates another building or so on. We spent a lot of time interrogating this, and working with a local firm called EJE Architecture, who have a very strong background in the history of Newcastle. We also did a lot of work on the design competition looking at Aboriginal culture in Newcastle, including the integration of the gathering place on the final site, which itself was an old corroboree site. 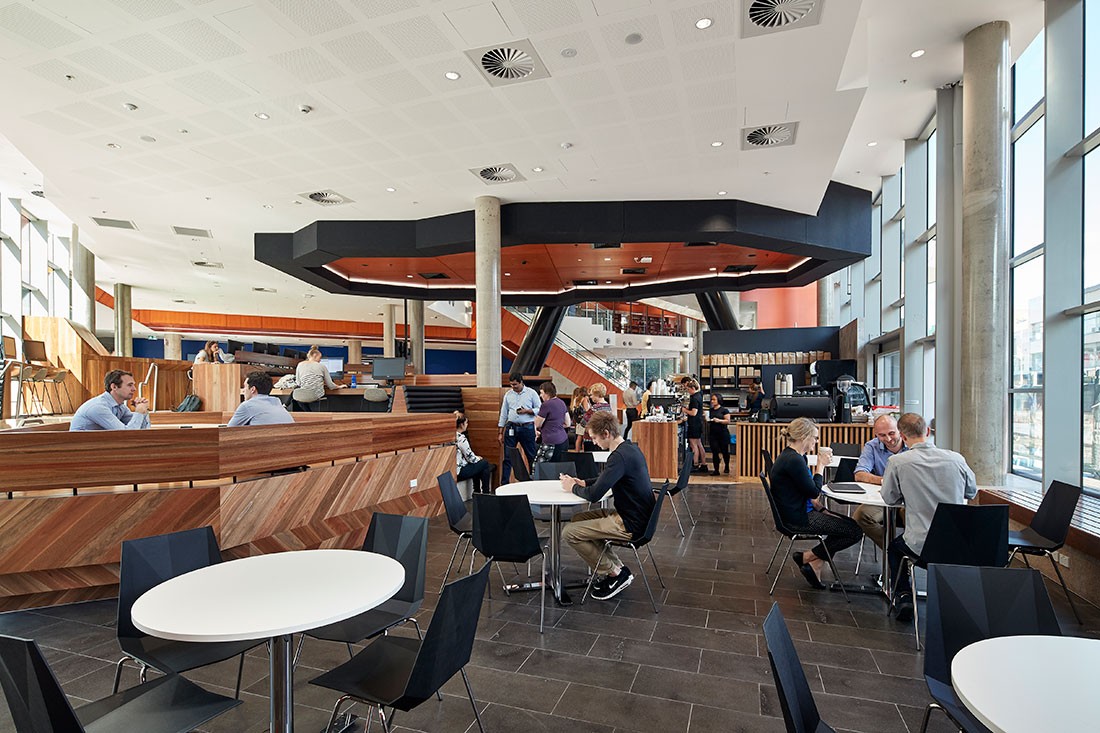 We also took reference from the local art deco sandstone buildings and the final design includes a sandstone base, which connects with the sandstone surrounds.

We also designed ‘urban rooms’ in the building that look out to the different landmarks of Newcastle – Nobbys headland, the port, Cooks Hill and other geological landmarks.

The thing we are most proud of is that when people experienced the building once it was completed, their biggest reaction was pretty much, “wow, I feel like I’m seeing my city afresh for the first time.”

We think you would also like this story about the Lyons-designed Medical School in Adelaide. 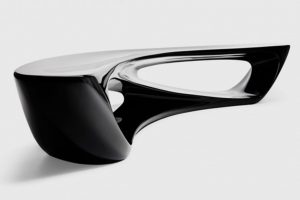 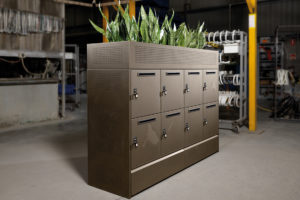 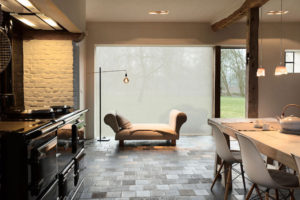 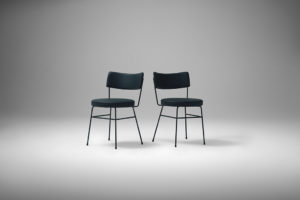