When Woods Bagot was approached to submit a concept as part of a competition to design the new Sculptform showroom, the team took the opportunity to throw caution to the wind and really get creative in their design response.

The project, which has won the ‘Workplace (Small)’ category of International Architectural Awards 2022 at the World Architecture Festival, was led by Bruno Mendes. Mendes with the team of architects and interior designers came together for what he describes as a “series of intensive design workshops”. The fast and furious approach gave rise to an early concept of a curving architectural insertion that leads people through the space in a curated manner. 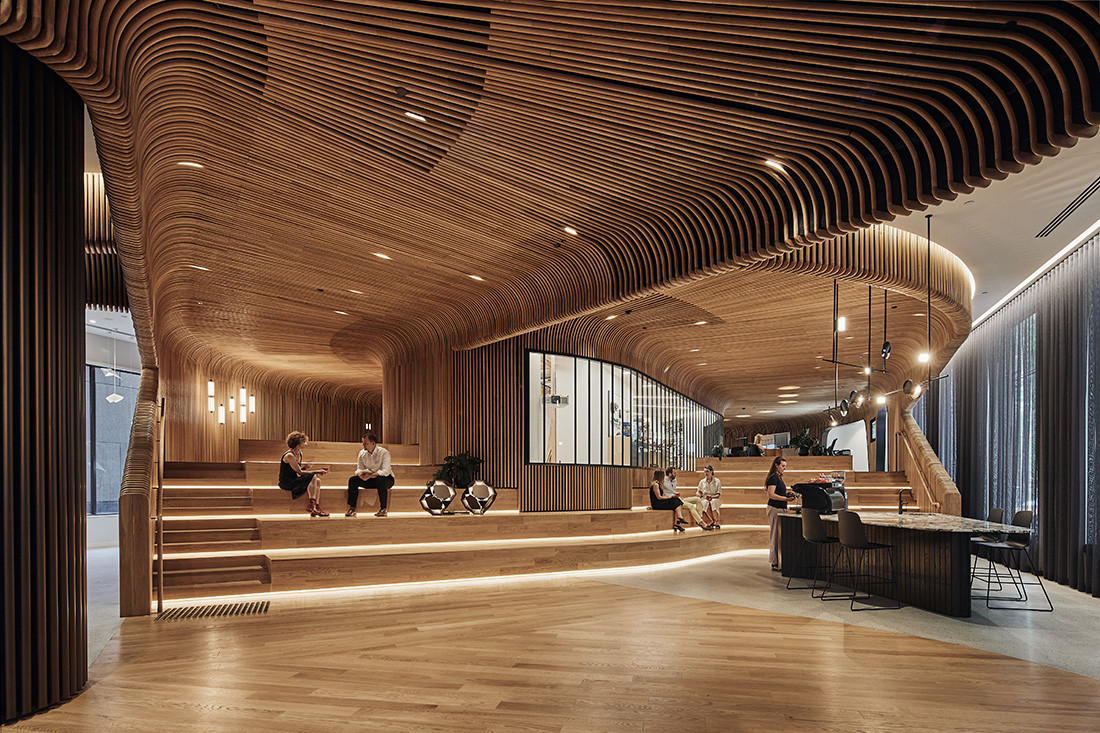 As a bespoke timber wall and ceiling manufacturer, Sculptform has been working alongside the design and architecture industry since its humble beginnings in Bendigo, Victoria. Having a statement showroom in the middle of Melbourne’s CBD presented an opportunity to truly showcase its handcrafted philosophy and design credibility.

“We thought this project had to be a summation of our own experience of working on other projects with Sculptform over such a long time. It was an opportunity to test details and to really push what is possible with timber,” says Mendes. The sculptural timber-battened detailing that enwraps the space is defined by a horizontal and vertical curving geometry, which was meticulously resolved through machinery acquired specifically to complete this project. 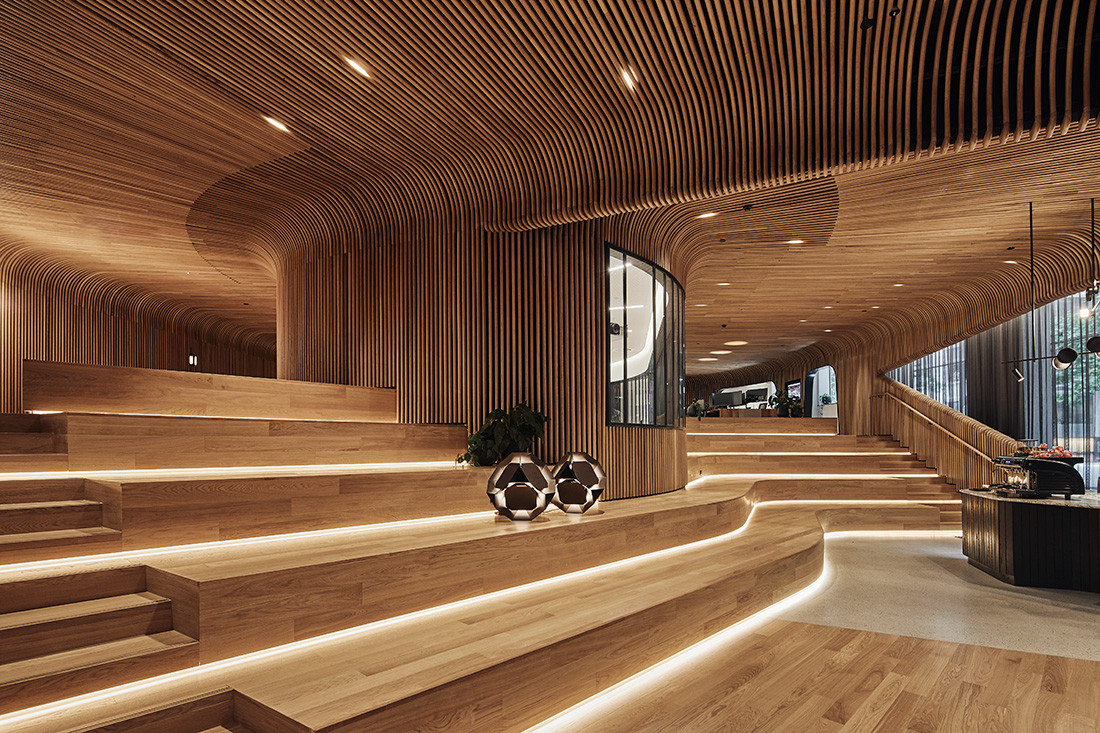 In many ways, this project is a demonstration of Sculptform’s capabilities. As such, the client also took on the role of manufacturer and builder. Design and documentation took approximately three months; but being able to achieve something so intricate and uniquely bespoke was only made possible by resolving most of the details onsite. It was a process that interior designer Krisi Patras says required lots of collaboration and a willing attitude. In order to accommodate the ceiling height, the timber battens had to be cut to a precise custom radius. “When you look at the timber elements in this project, nothing is standard, every single piece has been made to measure,” explains Patras.

This project blends multiple sectors in its execution, and was realised thanks to the cross-disciplinary knowledge of the team. Programmatically, the showroom encompasses much more than a typical retail offer. 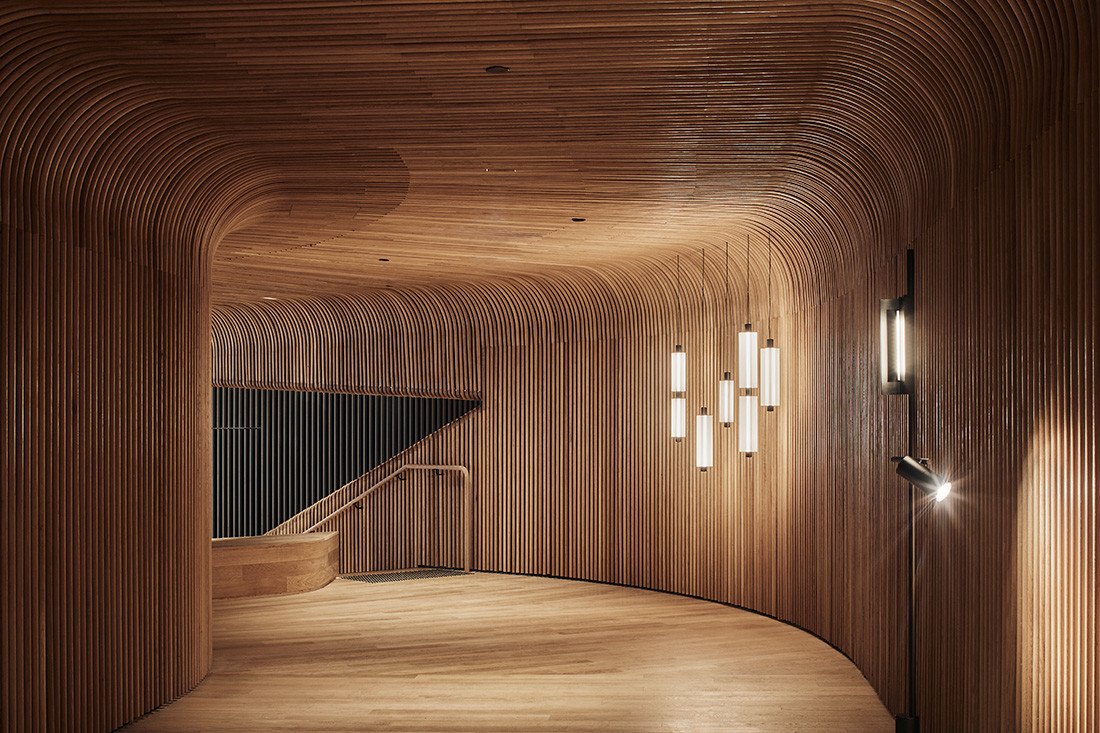 It is an immersive, experiential ‘showroom’ space, replete with a high-tech digital gallery. But it also includes a workspace for the team, a workshop, and an addition that Woods Bagot brought to the brief – a space for entertaining and presentations that can cater to different-sized groups.

Scattered into what would otherwise be dead zones, the leftover, angular pockets have been utilised for a range of purposes, all seamlessly hidden behind timber-battened doors to maintain the illusion of the curving form. The workspaces incorporate agile methodologies with versatile meeting spaces, stand-up meeting areas, and an ideation table. 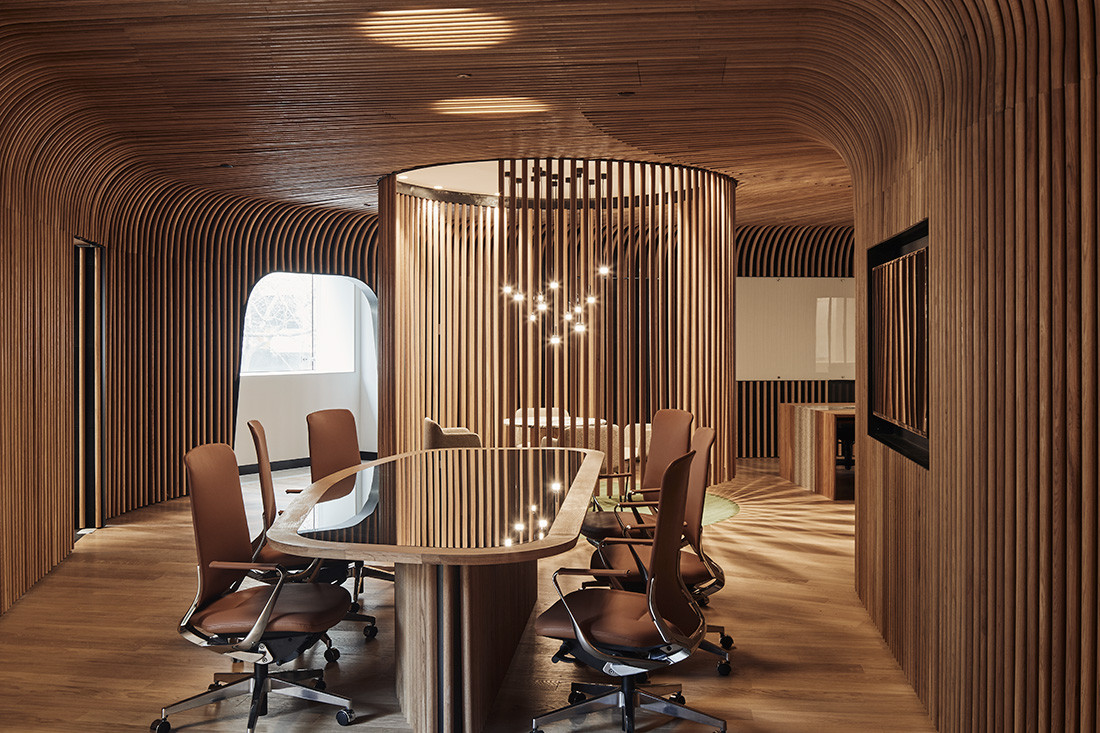 One of the key decisions with regards to the spatial planning was putting the workshop front and centre, something that would typically be placed out of sight, or back-of-house. “The workshop is in the middle because it was about really celebrating what Sculptform does,” says Patras. By flipping what is expected, the brand’s core function becomes the star in the space.

While the experience when in the space feels intimate and inwardly focused, lighting has been integrated to emphasise the drama of the curving timber forms at night-time, essentially creating what Mendes describes as a “billboard to the street”. Set within a ground level tenancy at the base of a tower, not only does this project successfully interface with the public, but it also shows that working within an existing building envelope can produce show-stopping results when thinking outside the box. 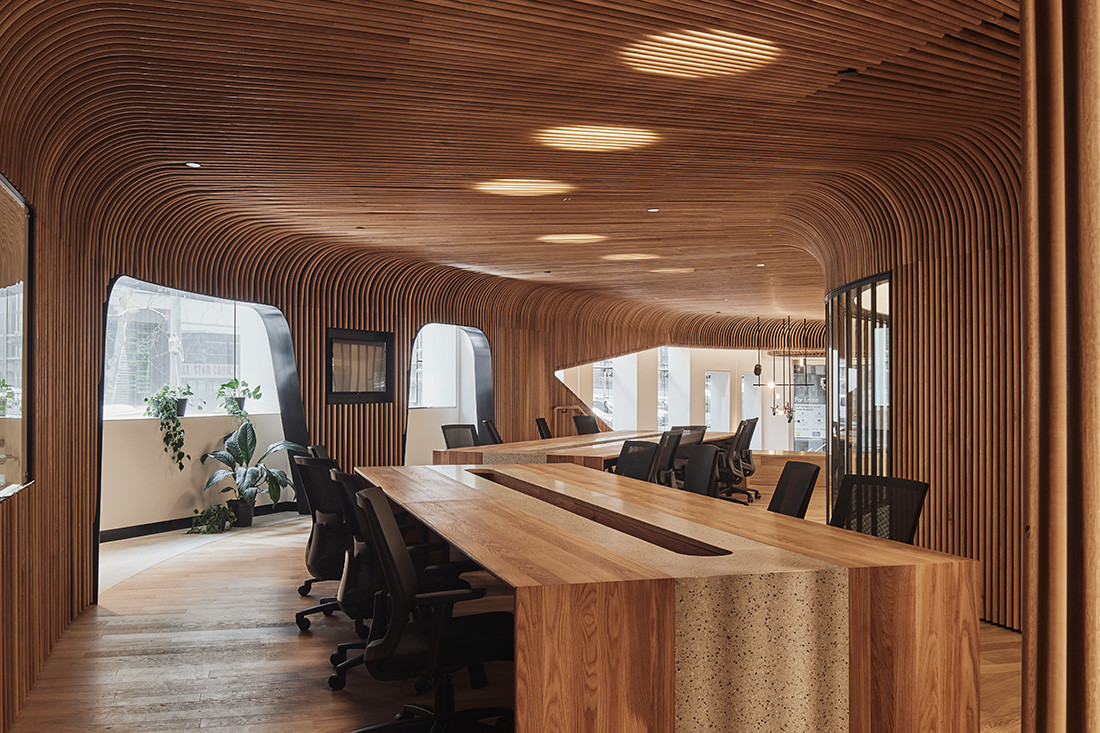 Blurring the line between retail showroom and installation, Sculptform accentuates what is possible when an idea is carried all the way from concept through to completion. It also presents a case study for just how impactful design can be when local manufacturing and quality craftsmanship come together. 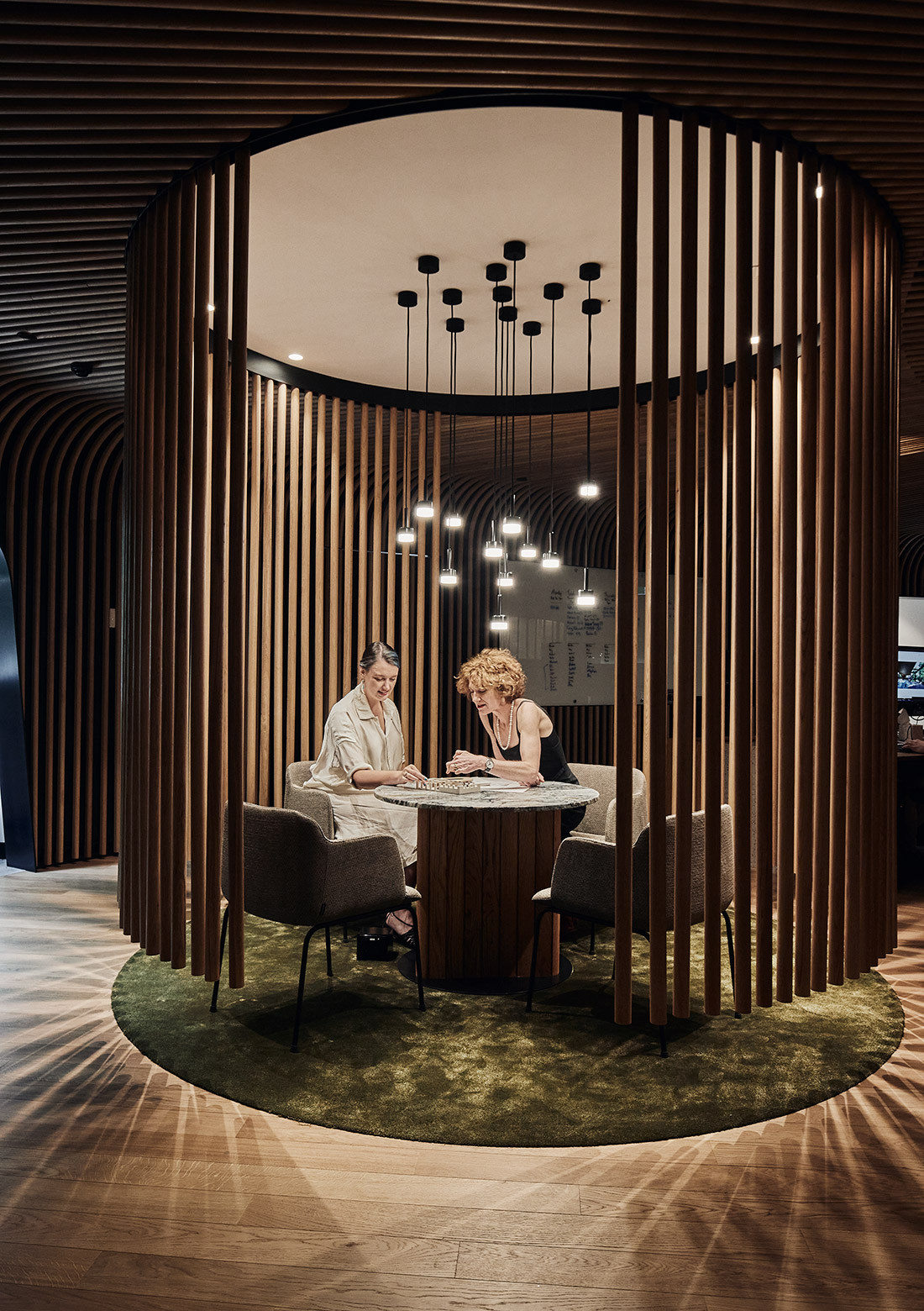 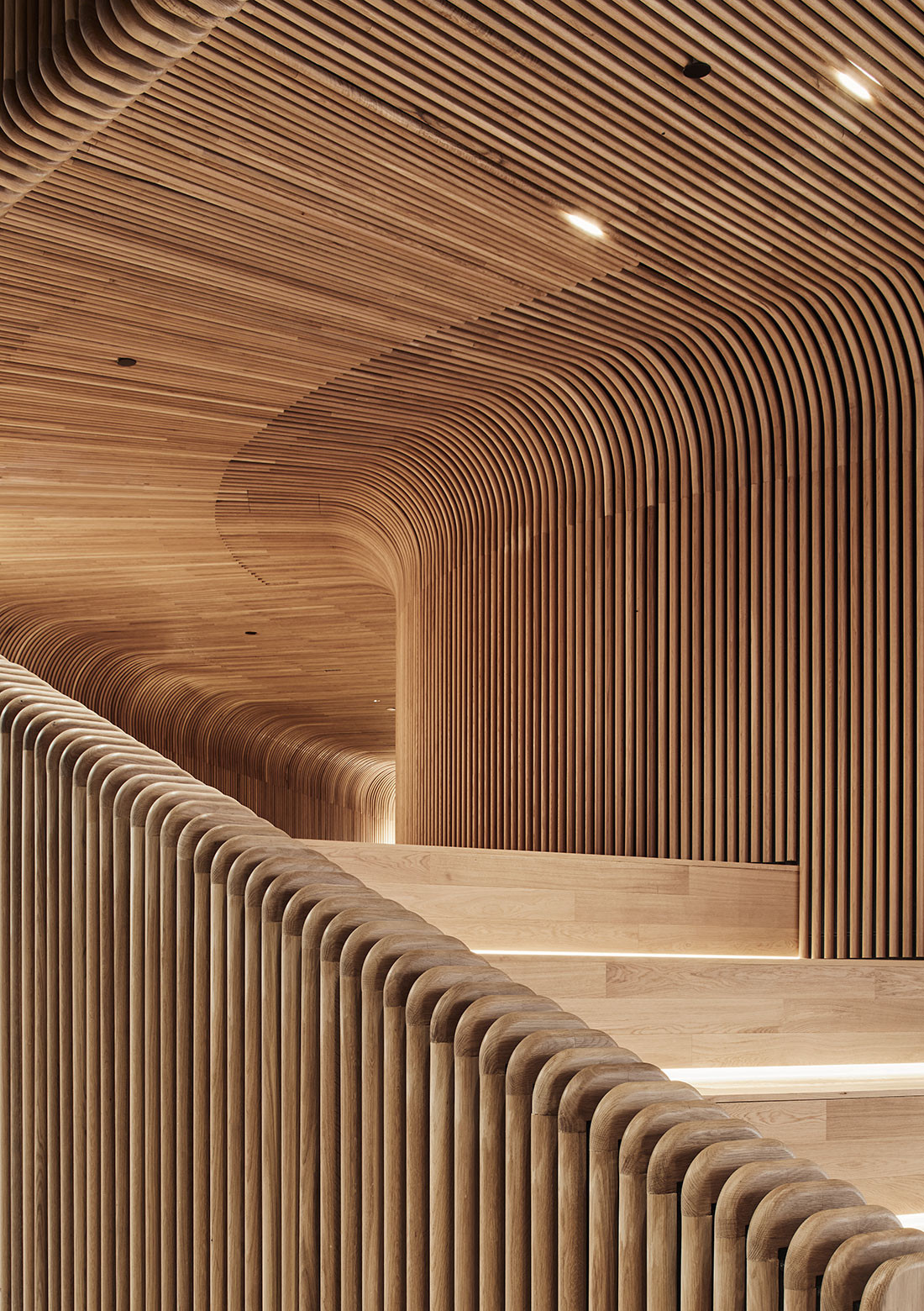