10 Years of B&B Italia in London

B&B Italia celebrate 10 years in their London showroom with a series of works from the world’s best-known architects and designers, as well as students and other creatives. Ben Morgan reports.

The London Design Festival was the perfect occasion for B&B Italia to celebrate their 10 years in the English capital.

Aside from the usual festivities – including a wonderful party launching the latest products from Milan – they also invited a number of prominent architects, designers, artists and students to create A4-sized ’commemorative mementos’.

The works were are on show at the Brompton Road store – a massive, modern showroom – to celebrate B&B Italia’s 10th anniversary in the location.

Featuring pieces from world-renowned architects such as Zaha Hadid (who actually etched one of her amazing designs onto an A4 mirror), David Chipperfield and John Pawson – who designed the showroom and submitted an original sketch as his memento. The prolific designers behind the 2012 London Olympic torch, Barber Osgerby, also presented a sketch of their recent works, while Noma Bar, famous for his cutout works that depict multiple figures in their negative space, contributed a quirky shower-related piece (see main image above). Getting decidedly un-technological with the latest trend, Thorunn Arnadottir of the Royal College of Art created a beaded QR code, directing visitors to the B&B Italia site. Interior stylist Faye Toogood paid tribute to the UP Series chair, toying with its feminine form in a playful photo shoot.

Stay tuned for more highlights from the London Design Festival online and in Indesign and DQ magazines. 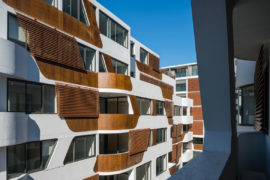 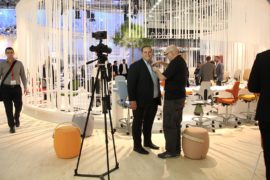 Earp Bros’ Crystal range is a decorative and versatile alternative to colour-backed glass. 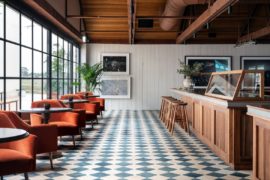