Sala Rattanakosin, by the unusually and memorably named, Onion architects, is a renovation project based on view. With some of Bangkok’s most iconic sites as the backdrop, the Thai architects have made sight and images their conceptual focus, blending old and new together at the same time. Words by Tess Ritchie. The previous Sala Resorts and Spa, which Onion have converted into a 17-room boutique hotel – including restaurants, outdoor deck and root top bar, sits in the Ta Tien Community of the older part of Bangkok. From the site you can see both the Temple of Dawn and Wat Po, or the Temple of the Reclining Buddha, home to more than 90 pagodas, 4 halls and 1 central shrine. Framing the view was central to Onion’s design. “On arrival, say the architects, “the first glance at the Temple of Dawn take places only after we make the right turn at the end of reception area. The framed image of the Temple invites us to move closer to the riverfront deck for a more panoramic view of Chao Phraya River.”

To embrace but also play with a view so catching, (Onion are known for their quirky designs) the team have created series of reflective surfaces throughout the space to replicate and the view over and over again. “In the upper restaurant, the same image is borrowed into the interior by the laminated glass partition, coated with black and golden films. What is interesting is the quality of the laminated glass that is partly reflective and partly transparent.” The scene outside, as well as its mirrored images, can be seen at the same time and through various angles depending on the viewpoints.

In the bathroom, the same illusory visuals entices the visitor, where laminated glass reflects only the upper half of the Temple of Dawn. Upstairs however, each bedroom has an uninterrupted view of the famous sites – no handrails or window sills get in the way here. Concsious to preserve the continuity between Sala Rattanakosin’s exterior and its surrounding, Onion have paid attention to the original architecture. Sets of folding doors from the initial structure remain at the entry as does an ornamented cement handrail on a same balcony. For the interior, they have flaked off cement to reveal a brick wall. At the same time, new materials are part of the design as a way to invent Sala Rattakosin’s character, namely the dark-gold laminated glass, black and white ceramic tiles and aluminum panels. “Sala Rattanakosin is designed to appear aged as much as modern,” say the architects. And with the contrasting reflective and crumbling materials, it is so. 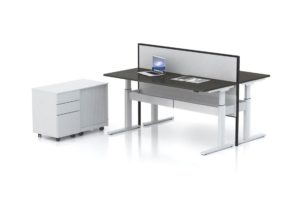 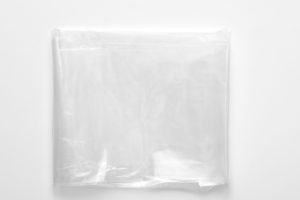 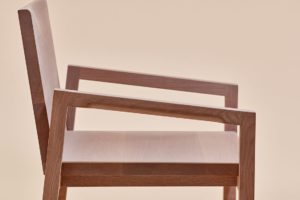 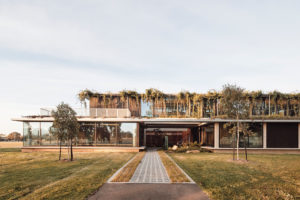 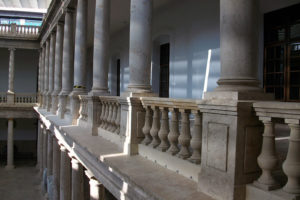