Mandi Keighran talks to Nipa Doshi and Jonathan Levien about their new work for Moroso and their impressions of Milan 2012.

Jonathan: The starting point for the sofa collection, ’Chandigarh’ was the city of Chandigarh in India, for which le Corbusier designed the master plan and architecture. It was thinking about the kind of space we would like to design a piece of furniture for. What is interesting about Chandigarh is the Modernist ideals set within the context of India. Nipa: It was really about this idea that India is always associated with tradition and craft and colour. We also wanted to express this idea that Modernity is so rooted in the country as well. We wanted to create a piece that is an archetype for a Modern icon, the Secretariat Building in Chandigarh by le Corbusier.

Also, doing something that is bringing the human dimension of Modernism to the front. There is also the detail of craftsmanship and pattern and cutting. The pattern is the abstraction of the Secretariat Building. It explores how Modernity sits very well with tradition, celebration, craft and embellishment. We like the idea that the world is not a pure place and, equally, our work is not pure. Jonathan: We made the paper model for ’Chandigarh’ in about 5 minutes. We presented it to Patrizia Moroso at our studio and immediately she was able to see the potential of this unresolved paper and wire model. From thereon we spent a lot of time developing the language and forms. We have a special relationship with Moroso, in that they always get the idea from the first sketch. Jonathan: The development is a process of continually coming back to the essence of the idea. It’s about not losing anything in the arduous process of bringing something into reality. Especially something like a plastic chair. The ’Impossible Wood’ chair was a prototype last year and has now been put into production.

Nipa: Design is a very hands-on profession. It’s about making things, working through details and ideas. After all that hard work, Milan is the culmination, the show, which I love. It’s the glamour part of design. Design is not actually glamorous at all. It’s satisfying to share it at this international level, and the Italians do it so well.

Jonathan: I think what is particular about Milan, and in particular about Moroso, is their willingness to experiment, and show ideas that are maybe not fully resolved, that need development to come to fruition. Nipa: I think Milan is a great place to be inspired. It’s the only event where the absolute experimental is going with the absolute commercial. I like that mix. It’s about creativity. You go into the city and you see completely abstract ideas and it sits comfortably with coming to the Fiera and seeing pieces in production.

Moroso is available in Australia from Hub Furniture.

Stay tuned to Indesignlive for more coverage from Milan

Occupying the first 15 floors of 1 Bligh Street, the new premises of law firm Clayton Utz are a seamless workplace that explores all the potential of this landmark Sydney building. 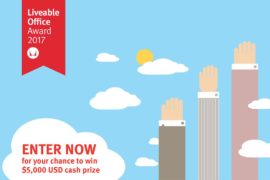 An annual highlight on the design calendar, the Herman Miller Liveable Office Awards are open for another year, and with it your chance to secure a USD $5,000 cash prize and a trip to New York City!