Sitting at the edge of the avant-garde, the latest store by cult Korean eyewear brand Gentle Monster is an exercise in theatre.

Just over a year ago, we reported on the beautifully irregular retail world of Gentle Monster’s first store in Singapore. The space at ION Orchard, like all of the Korean eyewear brand’s stores, is strongly based on a theme – in that case, ‘Samsara’, which means ‘cycle of life in Sanskrit. The series of installations within were designed to mimic the evolution of human thought, and a progression from obedience to freedom. 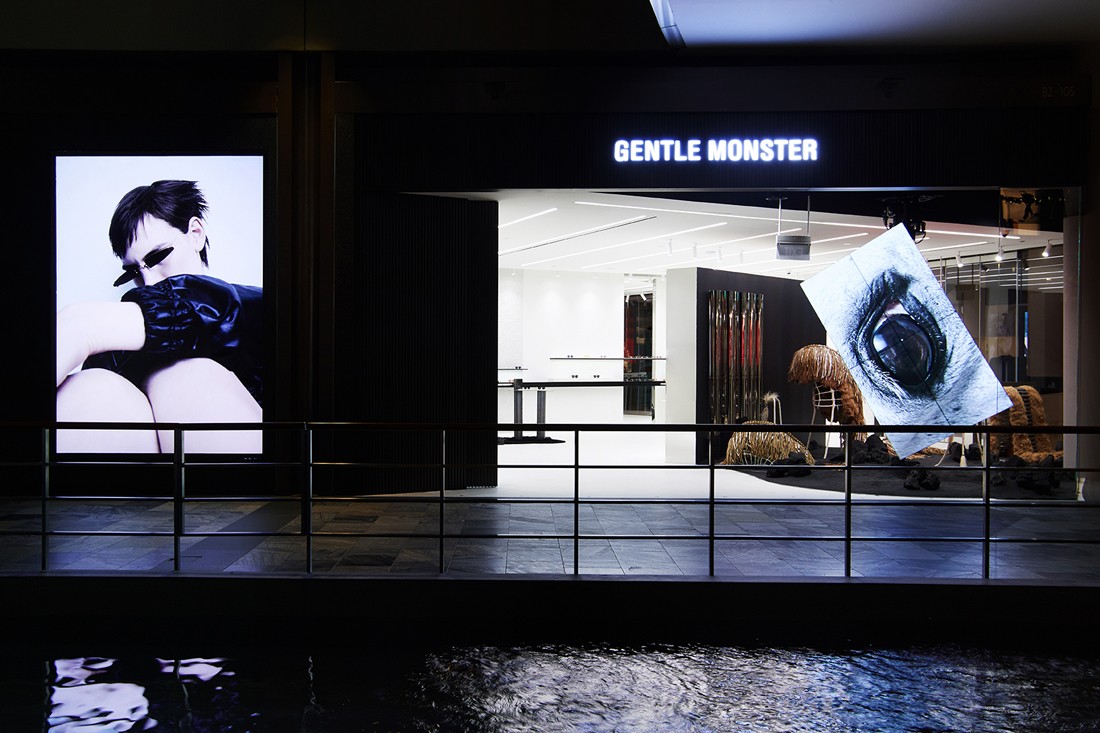 Now, Gentle Monster has opened a second Singapore store at Marina Bay Sands and it contains an equally engaging and irregular story. The new store is part of Gentle Monster’s ‘13’ project – an overarching theme based on a story of the extreme ecological change Earth would have to endure in the future due to changes to its axial tilt (a phenomenon known to exaggerate the seasons). The ‘13’ theme imagines that the shift on the axial tilt would be caused by the moon being pushed further away from the Earth.

The Marina Bay Sands store, like its ION counterpart, contains a series of abstract installations that tell the story of its theme: ‘The Data Addicts’. 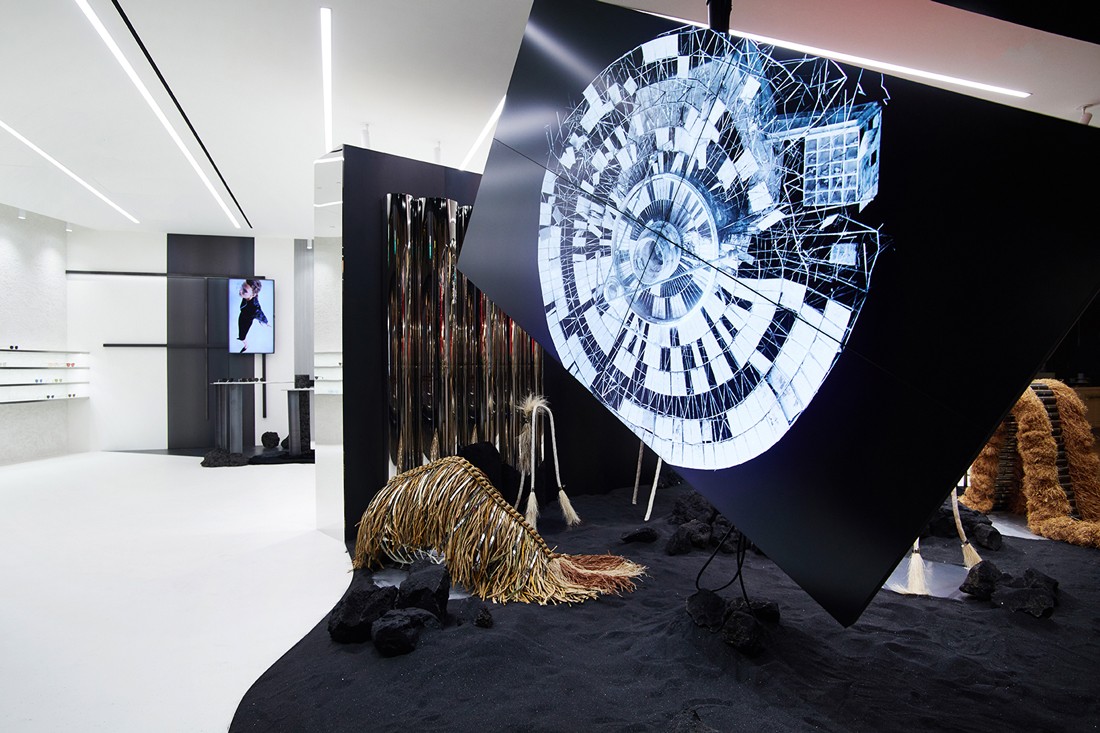 The narrative imagines a future scene in which people have become overly protective of themselves and obsessed with the limited amounts of information they have to ensure their survival in an extremely harsh environment. Their only source of information, explains the brand, comes from a few large, high-tech antennas that provide signals they must analyse and use for their survival. But there’s a catch – all the information the future Earth dwellers have been receiving is a lie. There is, however, one ‘real’ antenna that delivers true information, but it is broken and abandoned, hidden from the people.

You may be thinking the narrative of ‘The Data Addicts’ resonates with echoes of the ‘post-truth’ era, and that was precisely the intent of Gentle Monster. Says the brand, “This entire concept serves as a metaphor to describe the modern-day people who always seem obsessed and overwhelmed by the invalid information they receive daily.” 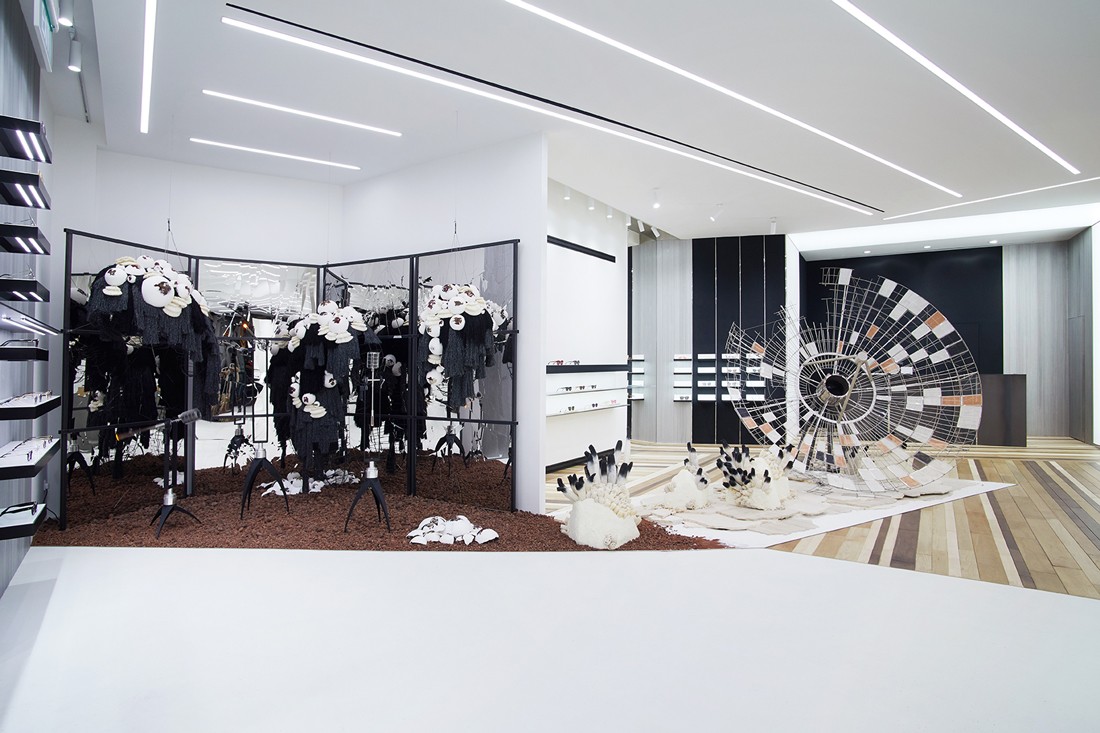 The very enviable task of translating this narrative into form fell to Gentle Monster’s in-house spatial designers Jihee Lee and Somi Shim. They created abstract installations of alien-looking outgrowths on harsh terrains of soil and rocks. The feeling that this is not the Earth as we know it is bolstered by the dominant presence of a large tilted screen that presides menacingly over the window display.

It depicts a disintegrating satellite dish against the unforgiving black of outer space, as well as the eye of an animal. Stepping further into the store reveals the dish in its physical reality – an incomplete wireframe with a fragmentary weathered skin. The eyewear, meanwhile, is displayed comfortingly around the perimeter of the store on sleek cantilevered shelves – arranged in a way that suggests the reassuring strata of rock or soil – a notion reinforced by the alternating stripes of colour on the timber strip floor.

Nature and technology find themselves at odds and in a strange symbiosis at Gentle Monster Marina Bay Sands – much like the unusual, but oh-so-satisfying fusion of culture and consumption.

See more retail design work from the Indo-Pacific. Get more design inspiration, sign up for our newsletter. 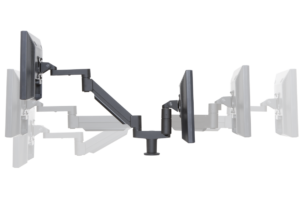 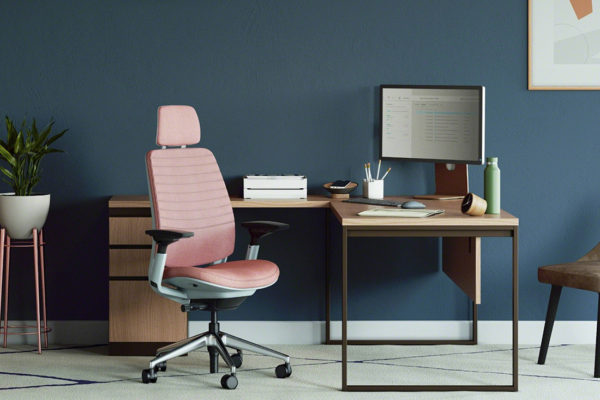 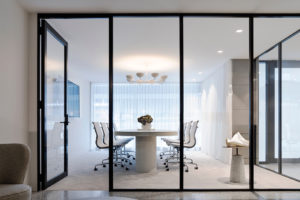 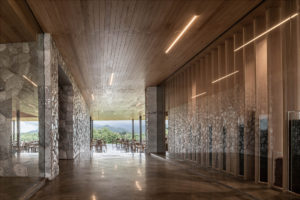 With this year well and truly underway the INDE.Awards 2021 are open for entries — this is your time to shine!