Celebrating 40 years since its completion, the iconic Sydney venue designed by Jørn Utzon, is an ideal choice to host the National Architecture Awards which celebrate excellence in contemporary Australian Architecture.

’We’re delighted to be holding the 2013 National Awards at the Sydney Opera House.

’It’s a chance to recognise the enormous value of design quality and its contribution to Australian society, through both the award winners and the wonderful setting,’ said Shelley Penn.

’Justine Clark, as former editor of Architecture Australia, has great experience in critical review and an in depth understanding of the breadth of work being done around the country.

’Ben Hewett is the South Australian Government Architect and has been a practicing architect and teacher in Sydney. He has a wonderful, generous approach and passion for architecture, along with experience spanning delivery of public, commercial and residential projects.

Celebrating excellence in architecture, the National Architecture Awards are the most prestigious awards in the design and construction industry, influencing architects, clients and aspiring designers alike.

The distinct aesthetics of a talented trio harmonise in the creative output of design studio, Sixhands. 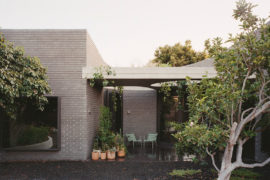 We take some time out to chat with the team from Sebel.