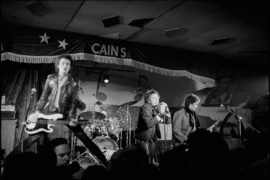 What Can Design Learn From The Sex Pistols

With little to no discernible talent or musical ability, The Sex Pistols became one of the most powerful forces in modern popular culture. No ads, no radio play, no major media – and only a working band for two years. They galvanised the fury of their Monarch-hating, Thatcher-loathing generation and lead the anarchist crusade with a spikey-headed army of passionate disciples in their wake. When was the last time design made you feel like that?