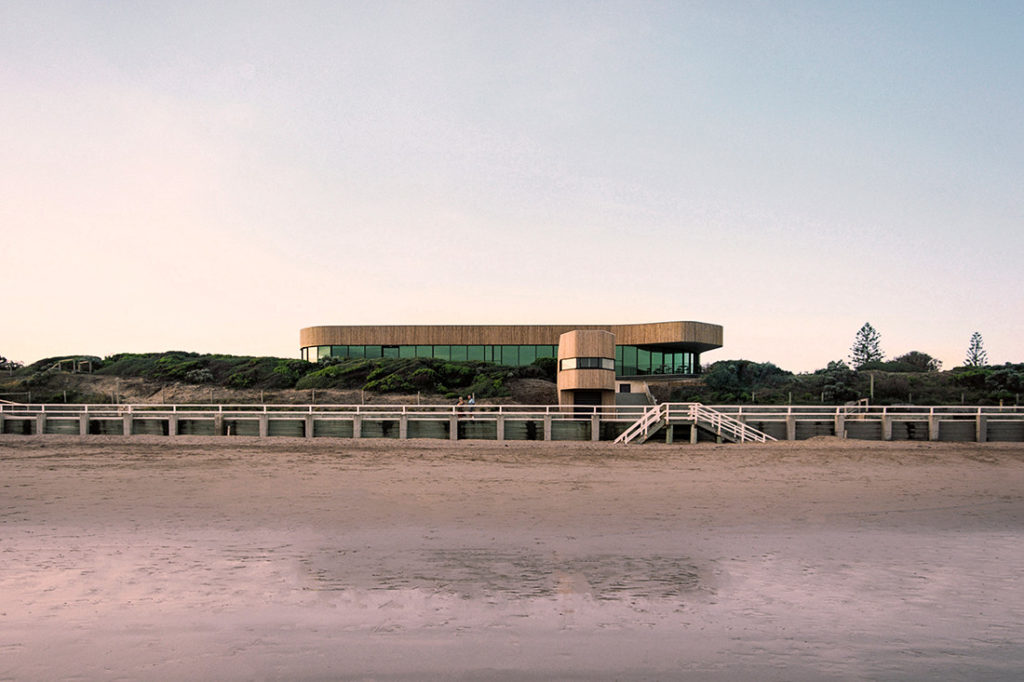 Designed to be contiguous with the surrounding landscape, the Wood Marsh design of Ocean Grove Surf Life Saving Club posits a continuation of the undulating form of the sand dunes. Moreover, each element exists in reciprocity with the location via the natural being woven throughout. A case in point: the control tower physically denotes the Victorian coastline. As Wood Marsh principal Roger Wood explains: “It makes reference to the rocky sandstone outcrop below the Point Lonsdale Lighthouse. It has to do with the age of the Victorian coastline and erosion so that little pinnacle of a control tower is meant to be looking like one of those defiant pieces of sandstone rock along the coastline that hasn’t washed away.”

For Wood, the project was in many ways preordained. 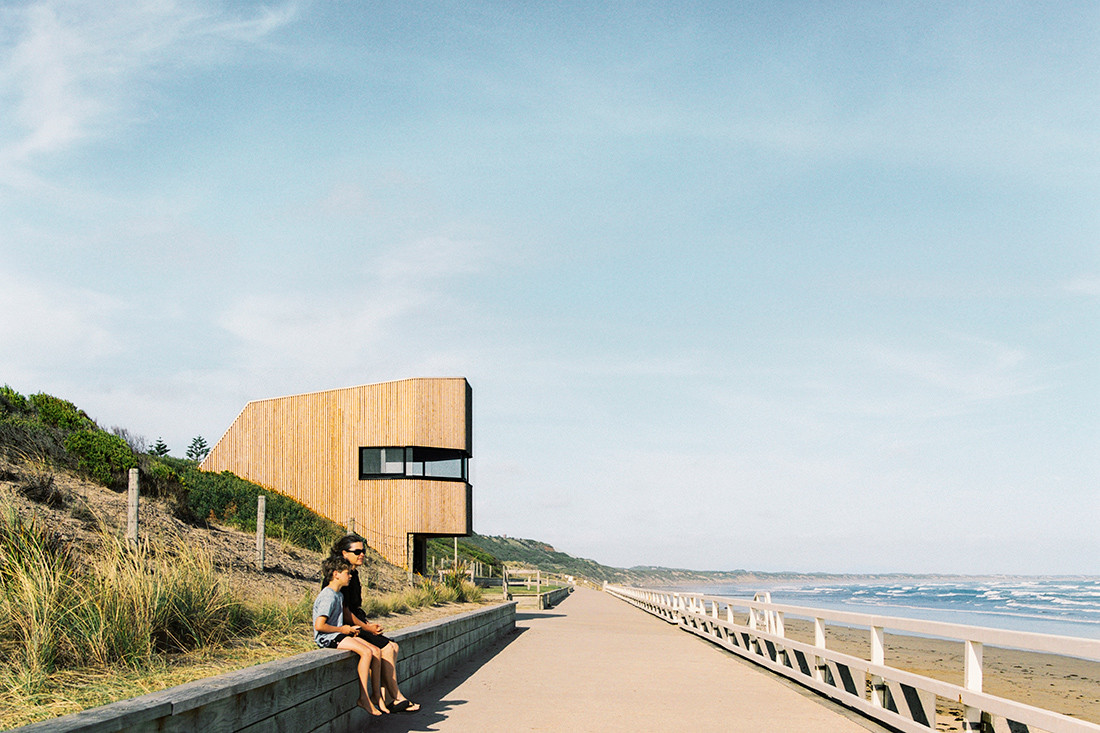 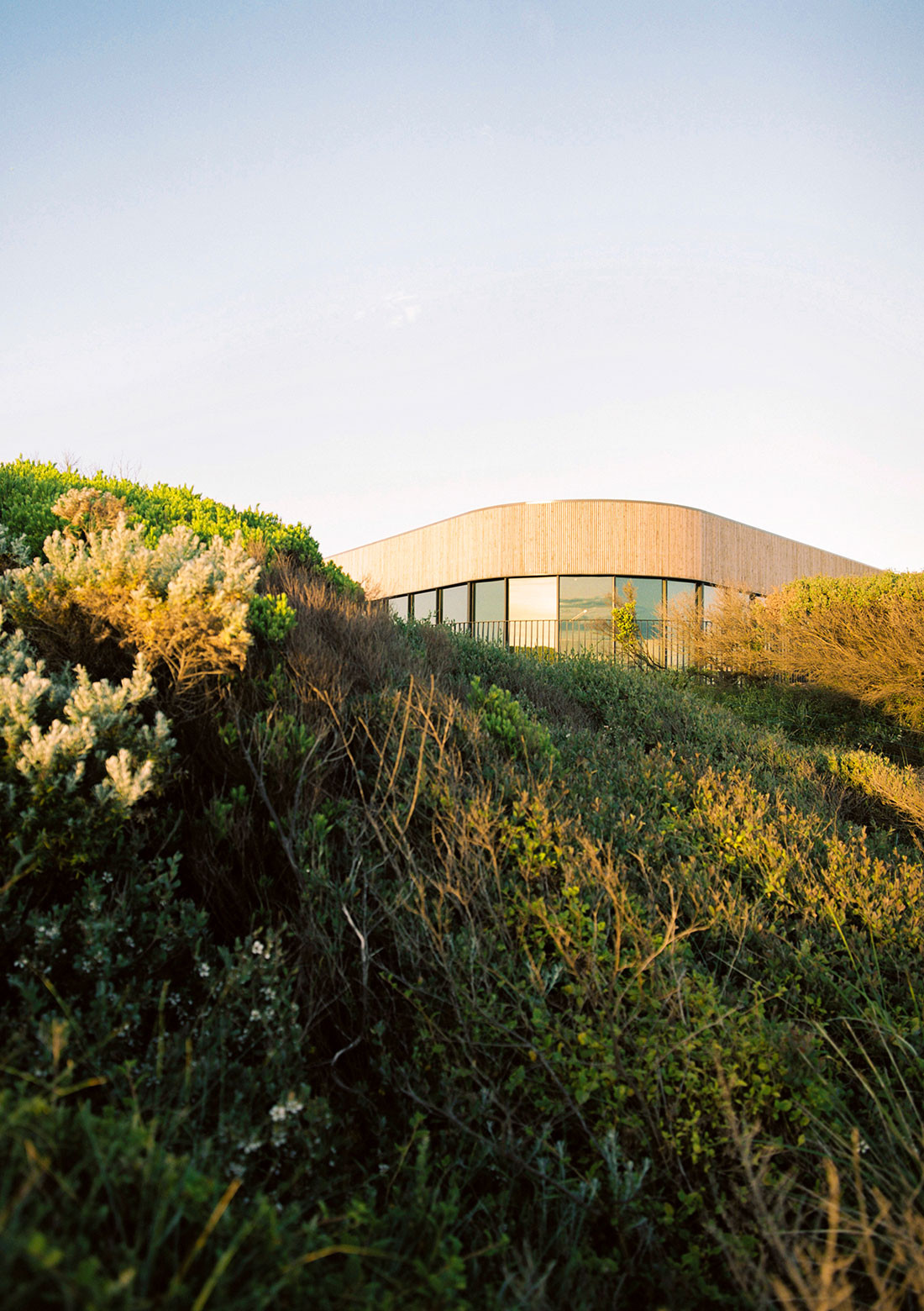 “Having grown-up on that coastline my entire life, it resonated in a particular way,” he says. “I was in the inaugural year of Nippers (the junior life savers) in 1964, and I still surf, so there is something about the ocean and that coastline that affects me deeply. Also the compassion of a voluntary organisation that saves lives.”

That being said, there was a tender process, at the end of which Wood Marsh was delighted to secure the project. The requirements called for a hospitable community facility that would provide both utility and capital-raising potential on a lean budget. “The whole project was done out of love and respect for the organisation and I’m very proud that our practice won the job, out of passion,” says Wood. “And, I’m thrilled with the result.” 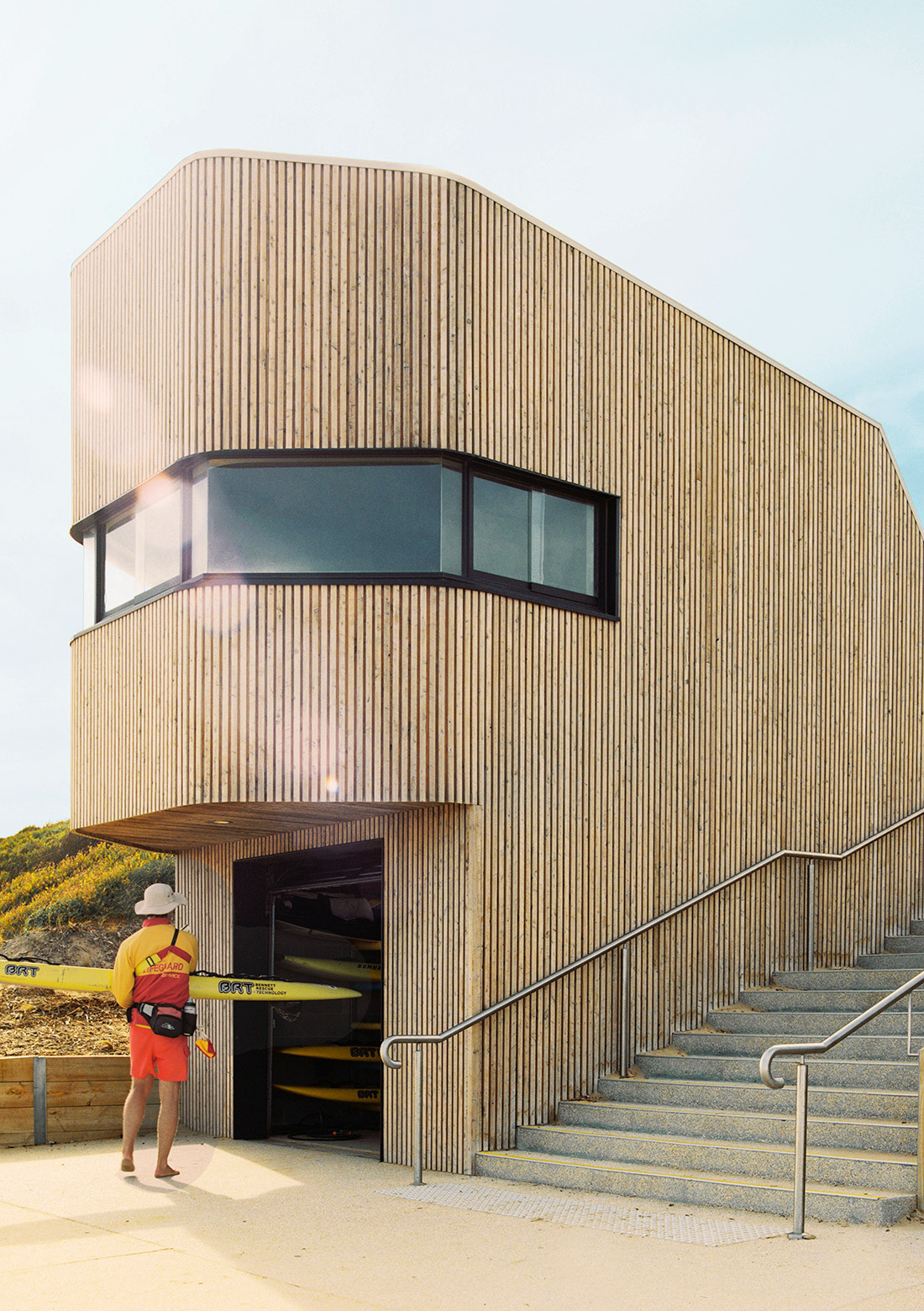 A location on Crown land allows ways of building without a permit. Even so, Wood Marsh argued to take the project design to the community and use no tactics to avoid scrutiny. What was presented and then achieved is a subtle and contemporary piece
of architecture that is functioning very well for the club.

Effectively, the building reads as single storey, with the lower level partially buried. “From the community aspect you have that long horizontal timber and charcoal cladding; from the beach you see above the vegetation a single storey building,” says Wood. The building is exceptionally well-embedded into the landscape, with cypress used to mitigate the hostile environment. 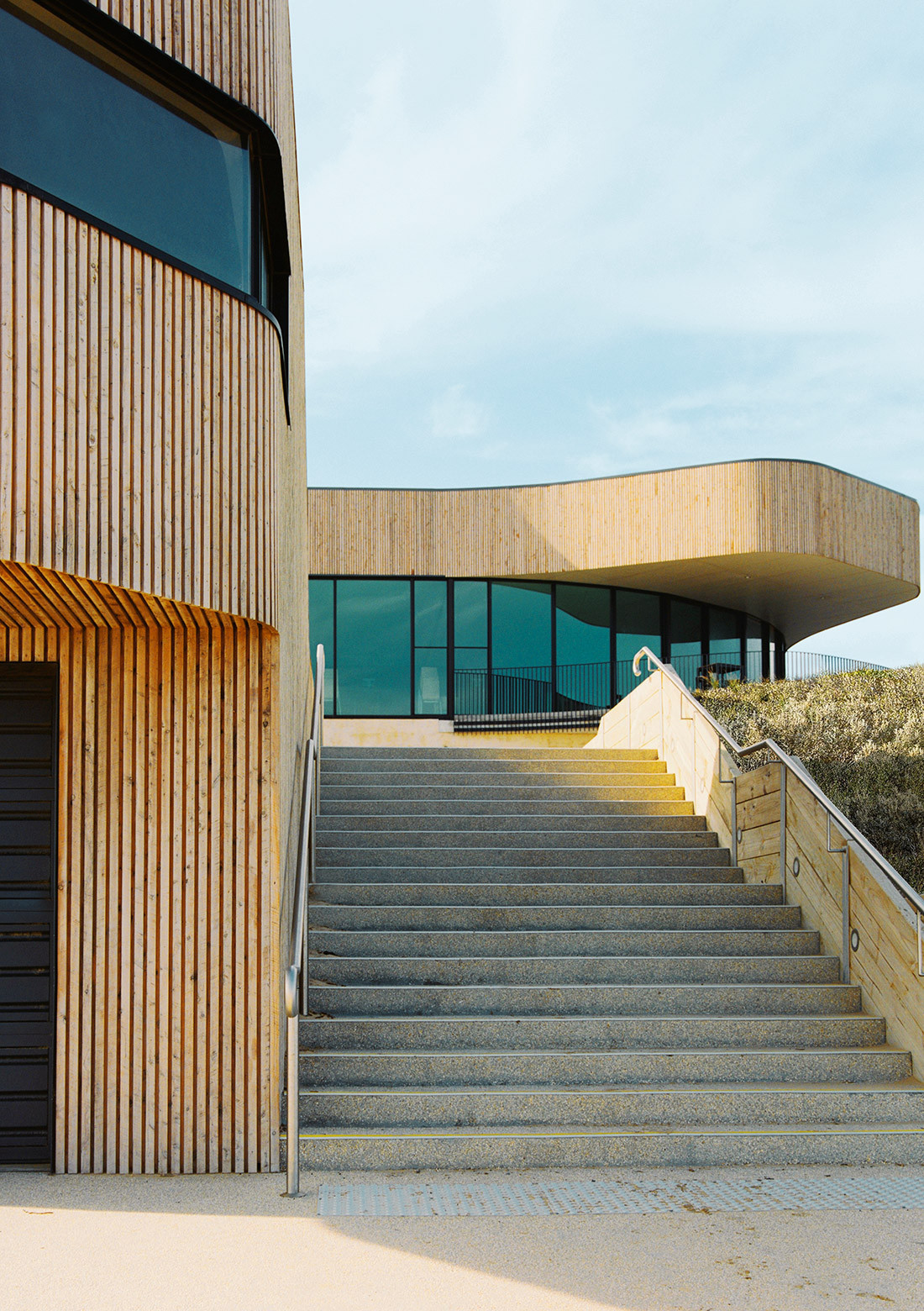 Materially beautiful, this material choice will not only last untreated for fifty years, thanks to its high resin content, but has already lost its cream tone to deliver a silvery grey expanse. “There are the silver tones in the saltbush along that coast and native grasses,” says Wood. “We thought it would be beautifully recessive to use the silvery cypress, on that primary sand dune, which has the undulating form. The rounded corners and the smoothness of the shape complement that landform.” Additionally, the long horizontal glazing line and horizontal slot of the control tower reference the horizon of Bass Strait, while the glazing itself reflects the landscape as the softly curved corners and native vegetation are amplified.

Intrinsic to the project was a comprehensive understanding of the functional, fiscal and environmental needs of the club. To these ends, the project was staged with the small control tower built first, to allow patrols to continue through summer. Next, the existing building was demolished and new facilities built in time to open for the following summer. As no part of the surrounding natural landscape could be disturbed, the whole of the new facility was designed to sit on the existing footprint. 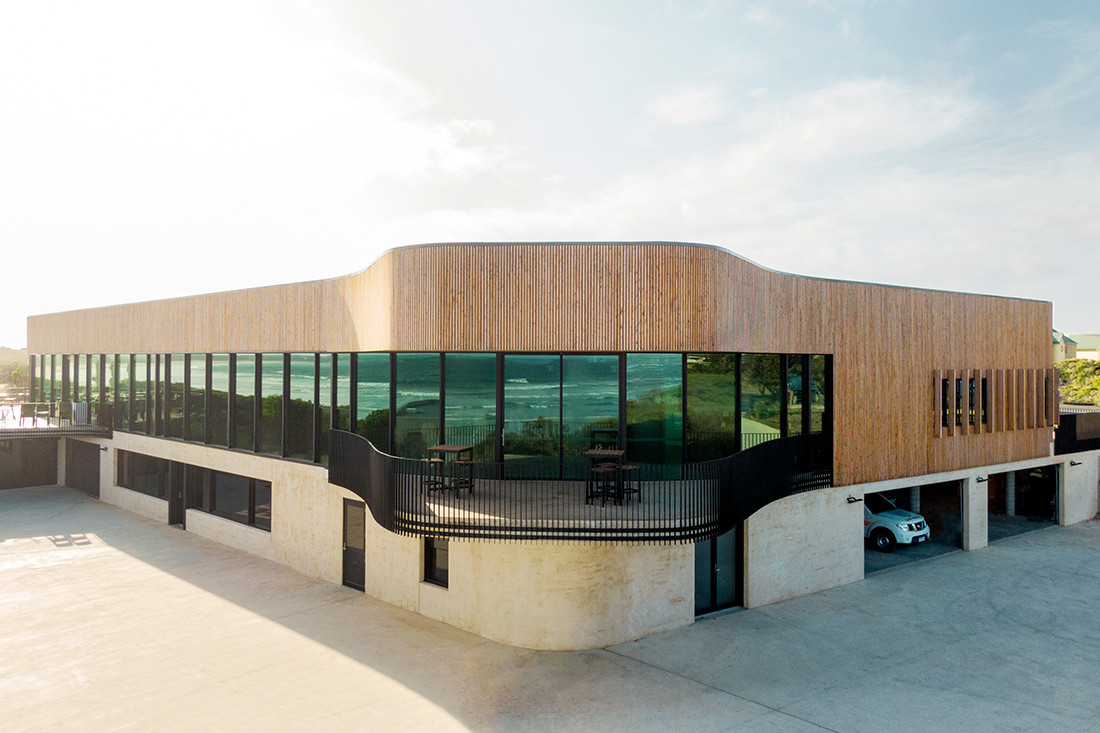 Previous to this design the route from carpark to beach was upstairs, across a landing, then downstairs and out. Wood Marsh lifted the base to allow direct access from arrival to tower. In doing so, the design considered the myriad utility needs of a working Life Saving Club, the whole of which is a hose-down interior. Access to surf-ski storage is directly across from the beach, while racks are diagonal (rather than the usual angled configuration) for less-dumped skis. From there, access to the male and female facilities is via a sand-trap so that most of the sand is gone prior to showering. Board and buggy type storage is also located on this floor. Importantly, the control room and first aid room, with direct access for ambulances, are also located in this ground-floor area. “If there is a major event, such as a plane crash, the control tower and control room coordinate emergency services for rescue,” says Wood. 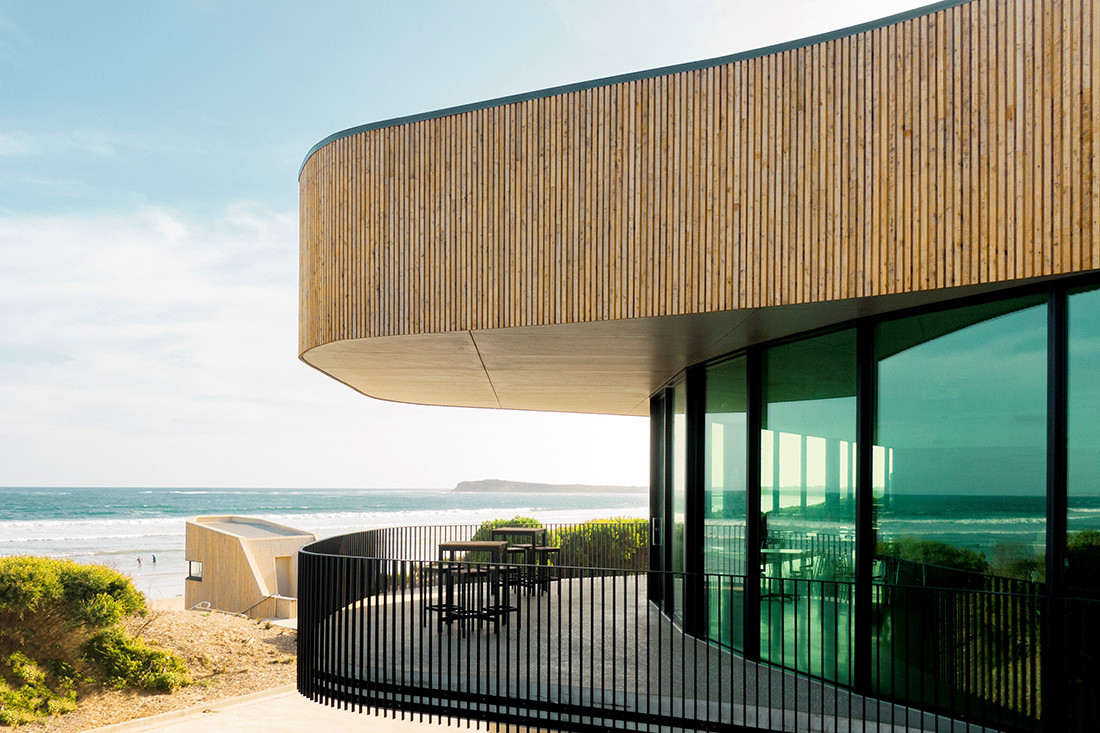 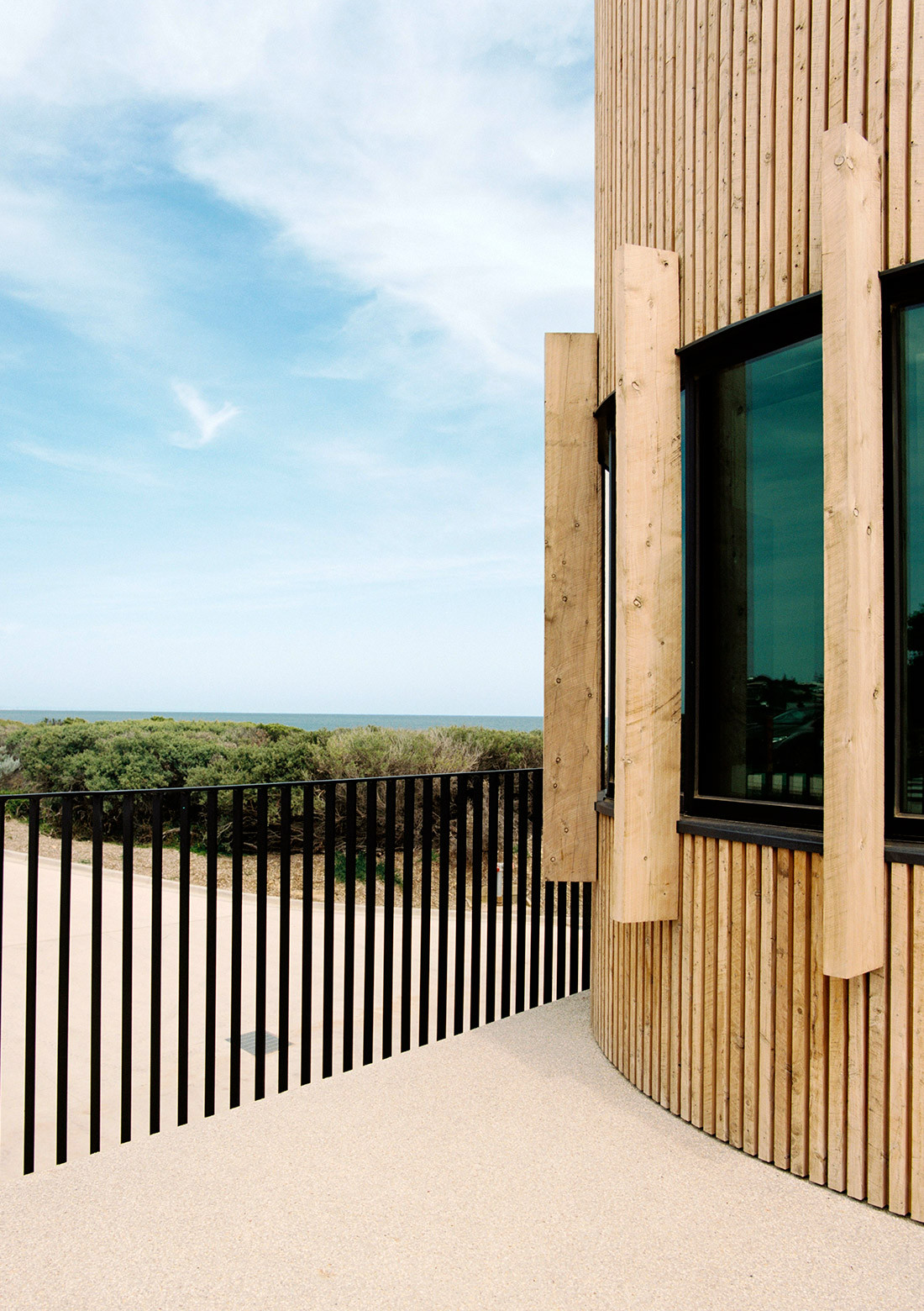 Being a Crown land project, the City of Greater Geelong utilises a committee of management to oversee assets along the coast. This includes Ocean Grove Surf Life Saving Club, where the Dune café — occupying one third of the glass line facing the ocean — is a realised source of revenue.

The remaining two thirds are a direct club asset, complete with commercial kitchen. “This gives capacity for members to have a nice time after a day of patrolling,” says Wood. “There is a bar and a kitchen for a drink or some fish and chips and a look out at the ocean.” 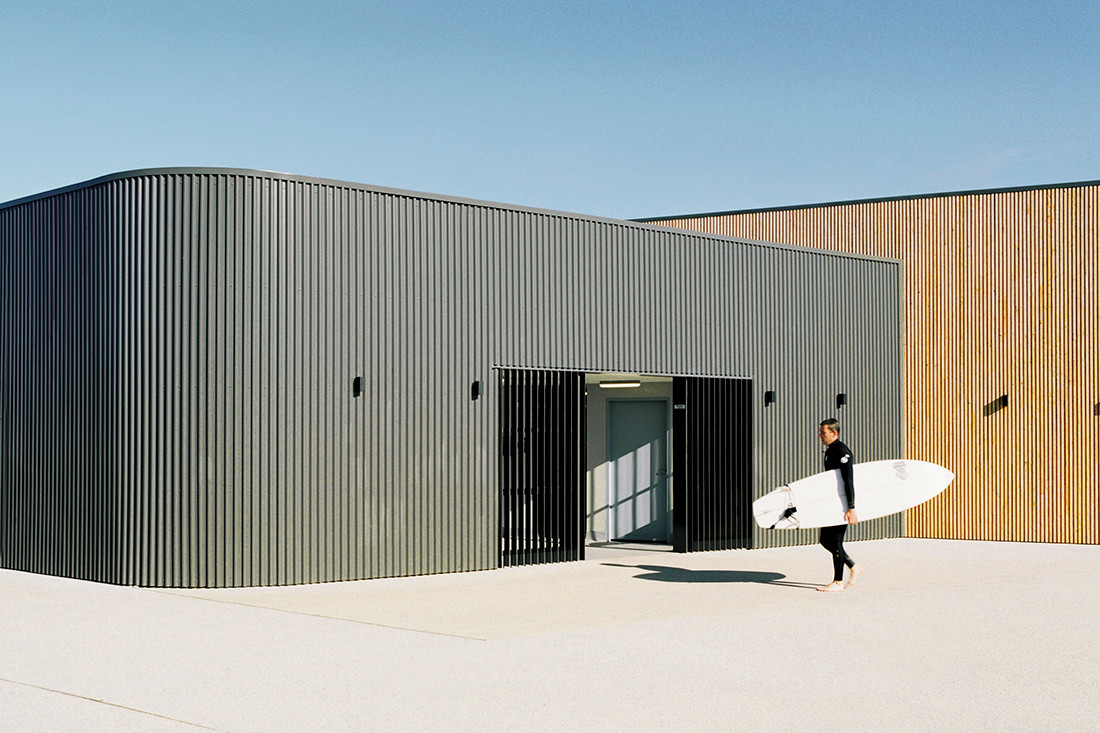 The Wood Marsh design addresses the very real concerns of a club that needs to apply for government funding while going out into the community shaking cans for donations — not to mention saving lives. To this end, the entire area is visually continuous with the same polished concrete floors and acoustic timber-batten-clad walls throughout. Two operable walls allow the space to be occupied in parts. Either the club can rent the café space to accommodate a wedding or large party, or the café can rent space from the club when required. In fact, so popular are these social areas that the club has introduced a social membership that welcomes all and has doubled its membership. “I’m really proud,” says Wood, “Not only is that an annual income for the club, but it means the community have responded to the architecture and said, ‘Yes, we would like to be involved with this’.” 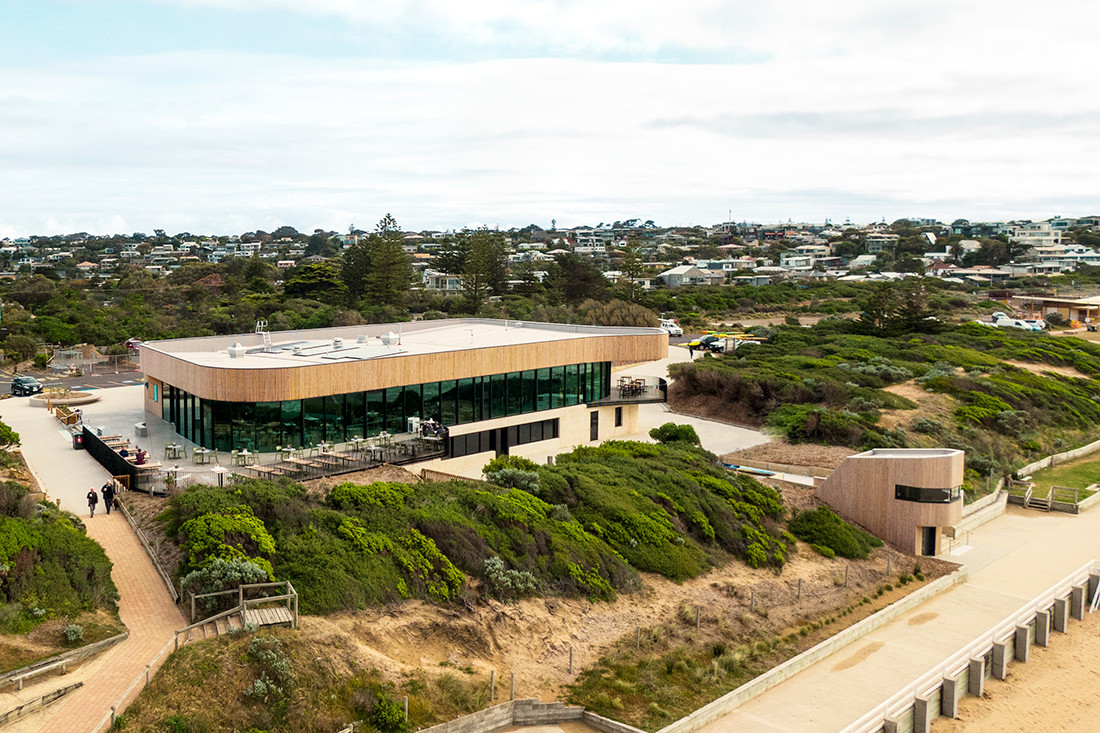 While the deck offers an unbeatable view as the sun sets, it also contends with an extremely hostile environment. “As with all the Victorian coastline, if you have a view you are facing the prevailing weather and south-facing,” says Wood. To resolve this issue, the floor-to-ceiling windows that face the ocean are double-glazed and have a performance film, which has additionally helped with the building’s sustainability. With a budget mandate that will always choose a piece of life-saving equipment over an architectural folly, every element of the design was rationalised. That said, sustainability was embedded to the full extent of the budget with solar augmenting the natural weather mitigation of sliding windows and doors. While there was great initial concern about running costs, these have been reduced with the new build.

Subtle, elegant and beautifully installed into its surrounds, the real beauty of the project lies in its thoughtful delivery of actual life-saving needs. There would be little to write about if Wood Marsh had delivered the functional square block of so many Surf Life Saving Clubs — but then, they never would. Instead, they have created an extraordinary building with genuine understanding of the club’s multi-layered needs as well as those of the greater community. Bravo! 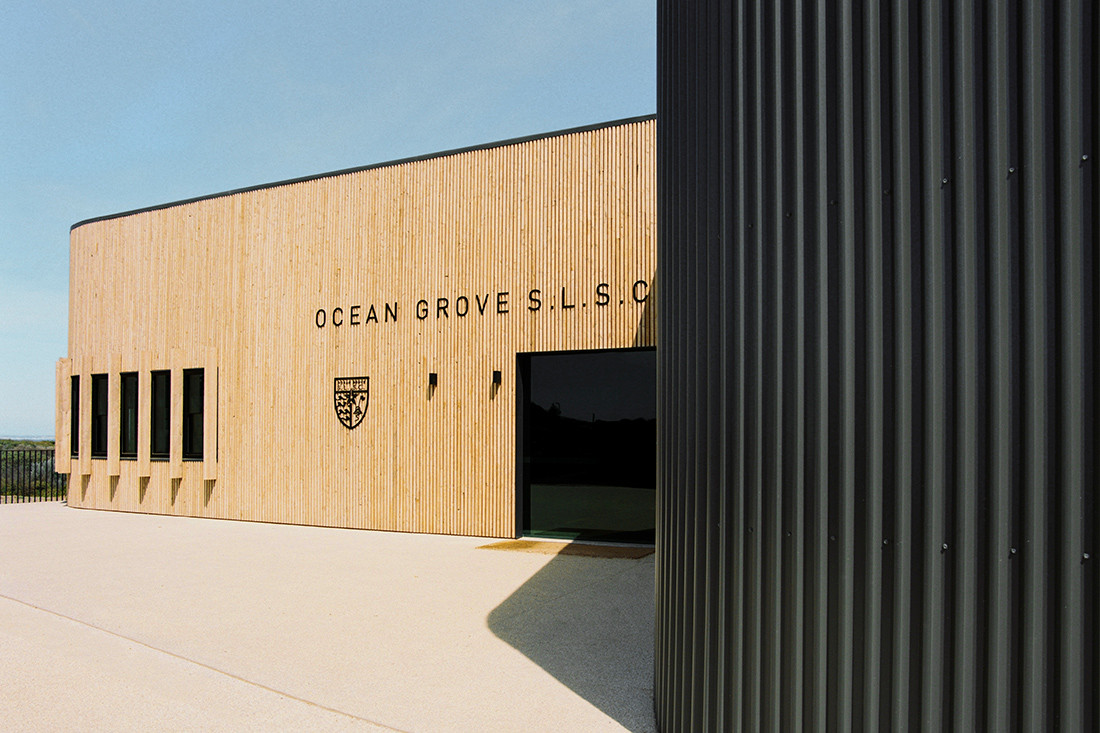 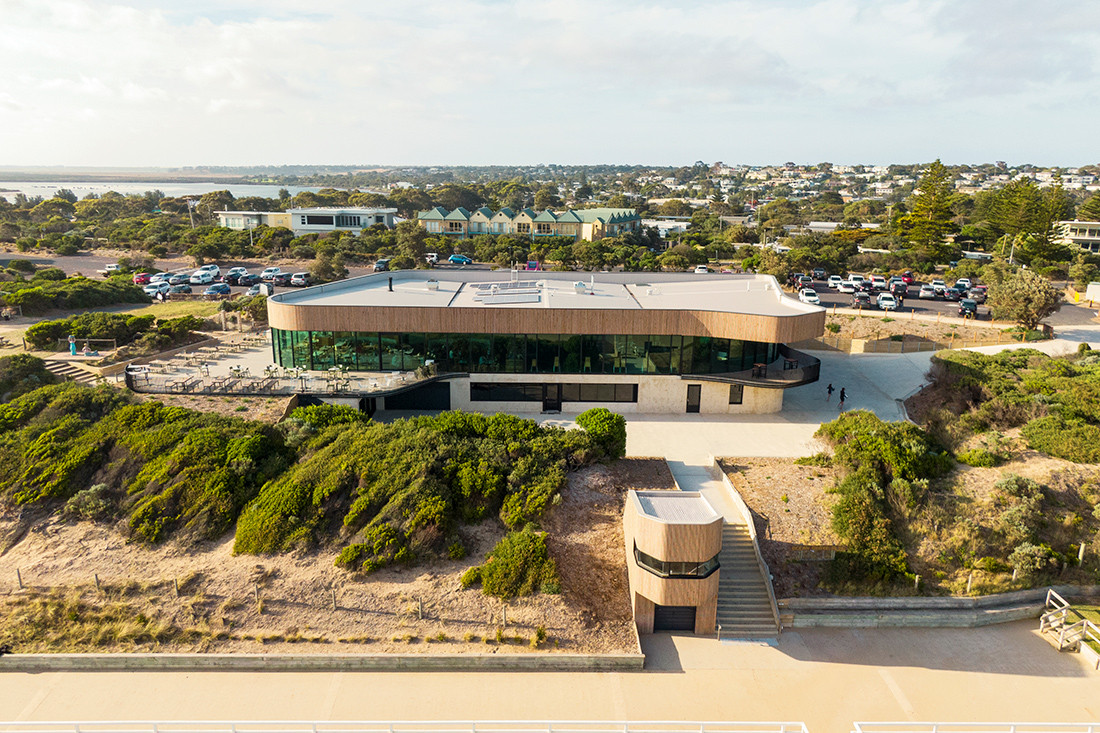 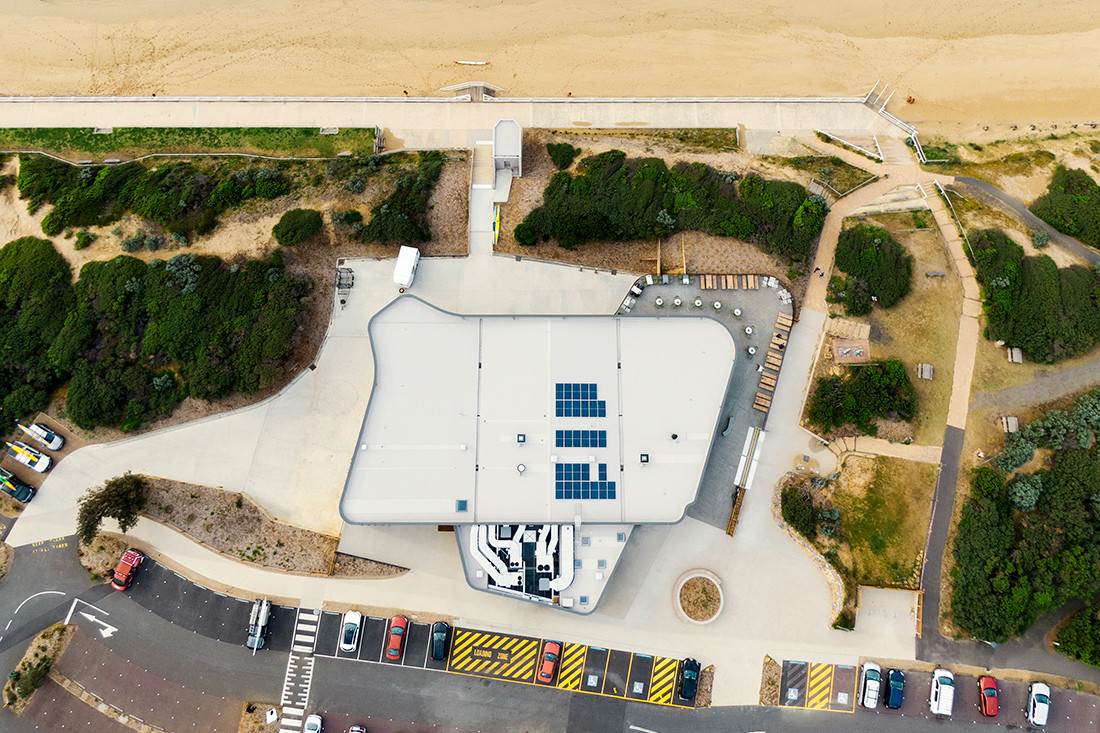 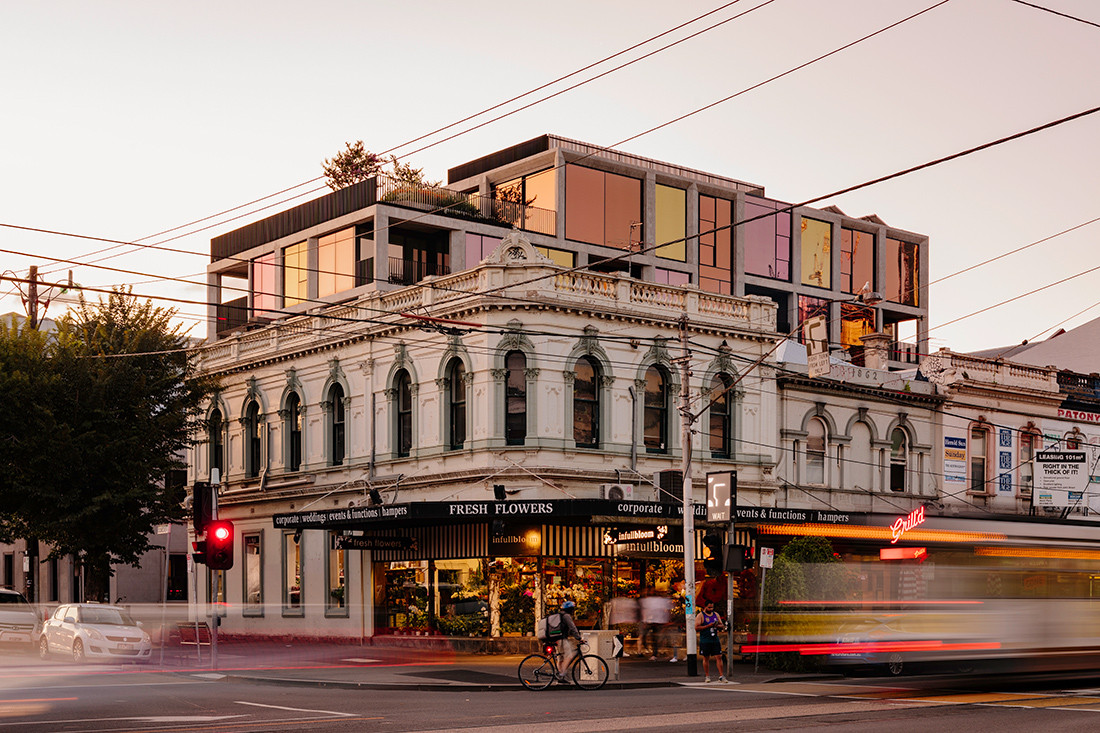 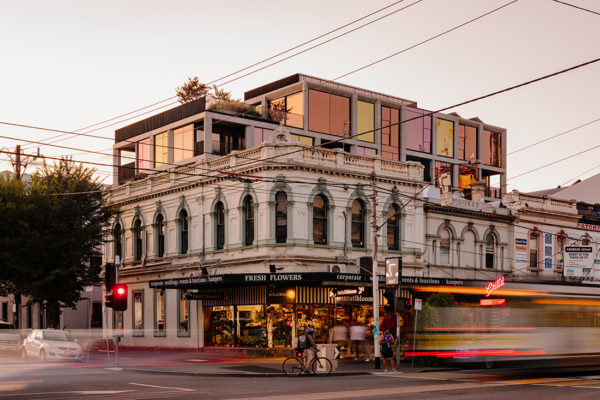 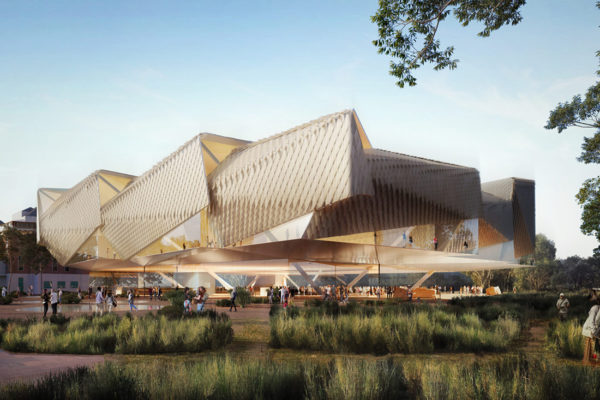 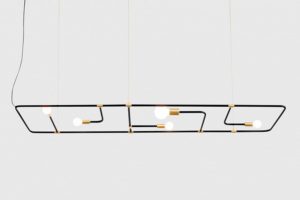 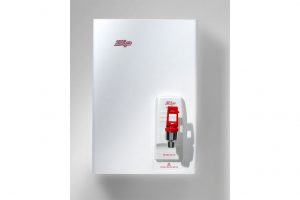 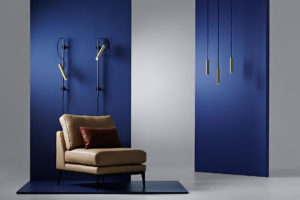 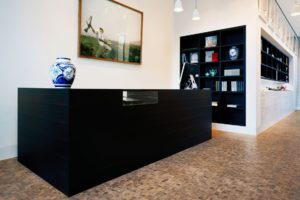 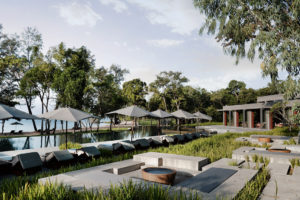 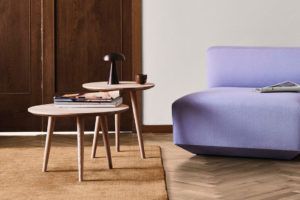